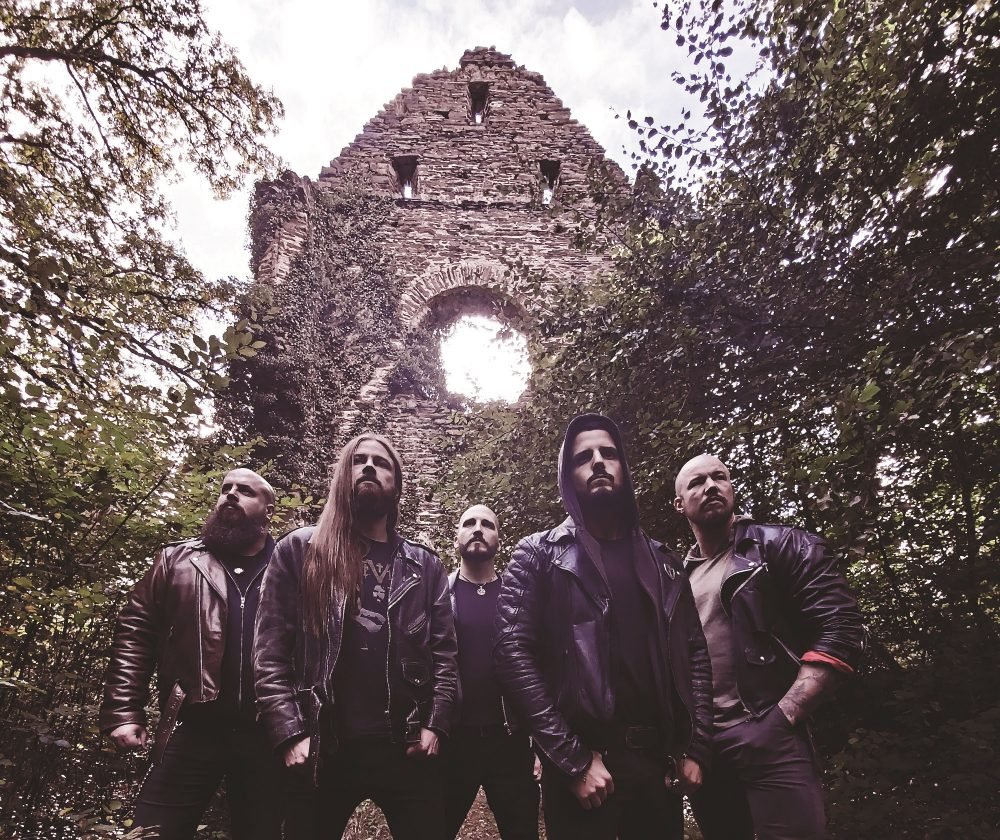 Classic doom metallers  Cross Vault premiere the new track “The Unknown Rewinds” at Deaf Forevermagazine’s website. The track is the second to be revealed from the band’s highly anticipated third album, As Strangers, We Depart, set for international release on May 28th via Iron Bonehead Productions. Hear Cross Vault‘s “The Unknown Rewinds” in its entirety exclusively HERE.

Slowly yet surely, Cross Vault has built a small-yet-stellar canon of releases that are extremely personal in nature and absolutely poignant in execution and effect. After two acclaimed cult albums – Spectres of Revocable Loss and The All-Consuming in 2014 and 2015, respectively – Cross Vault joined with Iron Bonehead for the release of a special mini-album, Miles to Take, released in late 2016. Although “just” two songs, this epic short-length was a transitional record in more ways than one: the quintet had solidified its lineup after two members had graduated from “session” status, and the sum result suitably proved stunning, showing how far they could stretch their Viking doom sound whilst keeping it fiercely focused. Cross Vault was on the march…

Alas, the quality of such a standard is not an overnight matter, and time did pass…now nearly five years since the release of that last, tantalizing EP. Cross Vault return, mightier and more majestic than ever, with As Strangers We Depart. Right from the opening notes, this is the goosebump-inducing Cross Vault many have come to cherish as the metal underground’s most overlooked masters: solemn, steady, sweepingly stoic, but stirring the emotions and indeed the heartstrings like few others can these days. The formula hasn’t changed across As Strangers We Depart so much as the bravado and confidence in which Cross Vault dole out these seven towering hymns. Viking-era Bathory is still a touchstone, as are Solstice and Minotauri, but where the battlefield has gone bloodied but silent, the quintet explores the solemn aftermath with devastating dynamics. Not that Cross Vault‘s third album is merely an exercise in loud/quiet cliche; rather, delicate nuance has taken centre stage with As Strangers We Depart, giving the record the overarching air of Viking funeral or simply a lament for lost times. And when that characteristic heaviness at last arrives, indeed is it the thunder of the gods…

Classic doom METAL is a very heavy, and very human, realm. Cross Vault roam that field of experience with pathos and bathos that’s blanching to behold, and none more so than As Strangers We Depart: without a doubt, a great work of ages!

Hear (and see) for yourself with the brand-new track “The Unknown Rewinds” exclusively HERE, courtesy of Deaf Forever, Germany’s defenders of the truth. Also, see & hear the previously revealed video for “Gods Left Unsung” HERE at Iron Bonehead‘s official YouTube channel. Cover and tracklisting are as follows: