CREEDENCE CLEARWATER REVIVAL AT THE ROYAL ALBERT HALL, THE FIRST-TIME RELEASE OF THE BAND’S LEGENDARY 1970 LONDON CONCERT AVAILABLE ON NETFLIX FROM 16th SEPTEMBER

AVAILABLE ON NETFLIX FROM 16th SEPTEMBER

After 50 years, the meticulously restored album will be released alongside the 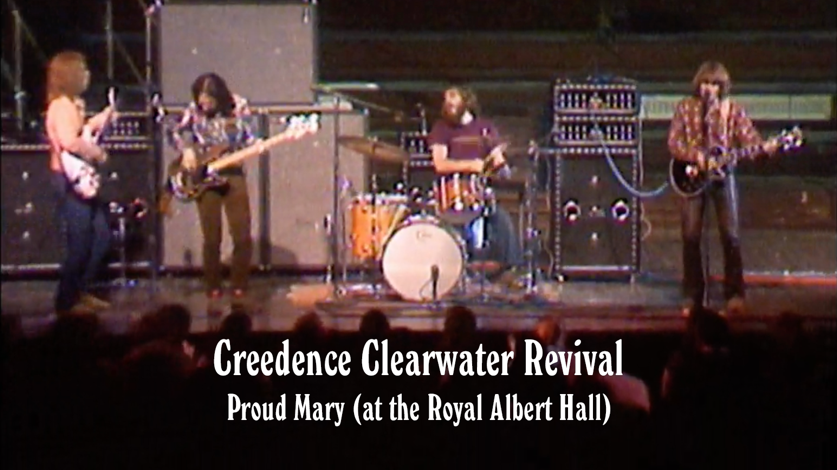 Everyman Cinemas have announced a very special one-night-only theatrical event run of screenings across the UK on Monday, September 12th. The film is screening as a highlight of the 2022 Everyman Music Film Festival. The event screenings up and down the country will be the only chance to see the film on the big screen in the UK, spaces are limited and are on sale now HERE.

Ahead of the upcoming release, CCR debuts the full live performance of their signature hit “Proud Mary.” The advance single is available now to stream or download. The video captures bandmates John Fogerty, Tom Fogerty, Doug Clifford, and Stu Cook teaming up on stage for one of their biggest hits, a song that became an instant classic and has been covered by countless artists to date, including Tina Turner, Tom Jones, James Bay and even the cast of “Glee.” “Proud Mary” originally started as a phrase without a home in Fogerty’s notebook. When he received his honorable-discharge papers in the mail in 1968, the song flowed right out of him. Peaking at No. 2 on the Billboard Hot 100 in spring of 1969, “Proud Mary” became the first of five singles to reach No. 2 for the group.  Watch the video now.

After spending roughly 50 years in storage, the original multitrack tapes were meticulously restored and mixed by the GRAMMY® Award-winning team of producer Giles Martin and engineer Sam Okell, who have helmed countless acclaimed projects together, including the Beatles’ 50th-anniversary editions of Abbey Road and Sgt. Pepper’s Lonely Hearts Club Band, as well as audio for the Elton John biopic Rocketman and Peter Jackson’s The Beatles: Get Back series. The LP was mastered by the celebrated engineer Miles Showell at Abbey Road Studios using half-speed technology for the highest-quality listening experience.

Creedence Clearwater Revival at the Royal Albert Hall will be released concurrently with the documentary concert feature film, Travelin’ Band: Creedence Clearwater Revival at the Royal Albert Hall. Directed by two-time GRAMMY® Award winner Bob Smeaton (The Beatles Anthology and Jimi Hendrix Band of Gypsies) and narrated by Academy Award®-winning actor Jeff Bridges, the film takes viewers from the band’s earliest years together in El Cerrito, CA through their meteoric rise to fame. Featuring a wealth of unseen footage, Travelin’ Band culminates with the band’s show at the Royal Albert Hall—marking the only concert footage of the original CCR lineup to be released in its entirety.

When Creedence Clearwater Revival stepped onto the Royal Albert Hall’s stage on April 14, 1970—just days after the Beatles announced their breakup—the California rockers had arguably just become the biggest band in the world. Leading up to the show, CCR had enjoyed an unprecedented “magical year,” as Jeff Bridges narrates in the film. “In only 12 months the band had achieved five Top 10 singles and three Top 10 albums [Bayou Country, Green River, Willy and the Poor Boys] on the American charts, outselling the Beatles. They had appeared on the legendary Ed Sullivan Show and played to over a million people across America, including the hundreds of thousands gathered at Woodstock. ‘John, Tom, Stu, and Doug’ may not have had the familiar ring to it of ‘John, Paul, George, and Ringo,’ but Creedence were challenging the Beatles for the title of the biggest group in the world.” During their two-night sold-out residency at the iconic venue, CCR not only followed in the footsteps of acts like the Rolling Stones, Led Zeppelin, Jimi Hendrix, and the Beatles, but they proved they were equals.

While Creedence Clearwater Revival would go their separate ways just two years later, speculation around a live recording of that legendary concert began to permeate their fanbase in 1980. That same year, Fantasy Records had released a live album by the band, mistakenly titled The Royal Albert Hall Concert. It was quickly discovered that the audio was, in fact, from the Oakland Coliseum show, captured months earlier. While the label rushed to sticker the album with correctional information—and properly re-named the January 1970 performance as The Concert for later production runs—actual footage from the Royal Albert Hall remained the stuff of rock ’n’ roll lore…until now.

See Travelin’ Band: Creedence Clearwater Revival at the Royal Albert Hall at Everyman Cinemas on Monday September 12th at the below locations:

1. Born on the Bayou

10.  The Night Time Is the Right Time

Craft Recordings is home to one of the largest and most essential collections of master recordings and compositions in the world. Its storied repertoire includes landmark releases from icons such as Joan Baez, John Coltrane, Creedence Clearwater Revival, Celia Cruz, Miles Davis, Isaac Hayes, John Lee Hooker, Little Richard, R.E.M., Joan Sebastian and Traveling Wilburys. Plus, the catalog recordings of celebrated contemporary acts including A Day to Remember, Evanescence, Alison Krauss, Nine Inch Nails, Taking Back Sunday and Violent Femmes, to name just a few. Renowned imprints with catalogs issued under the Craft banner include Fania, Fantasy, Fearless, Musart, Nitro, Panart, Prestige, Riverside, Rounder, Specialty, Stax, Vanguard, Varèse Sarabande, Vee-Jay and Victory, among many others. Craft creates thoughtfully curated packages, with a meticulous devotion to quality and a commitment to preservation—ensuring that these recordings endure for new generations to discover. Craft is also home to the Billie Holiday and Tammy Wynette estates which preserve and protect their respective names, likeness and music through day-to-day legacy management of these cultural trailblazers.