Devon punk-roots trail-blazers, Crazy Arm, head out this autumn on a belated UK tour in support of their new album ‘Dark Hands, Thunderbolts’. The album, their fourth on Xtra Mile Recordings, was released this January to rave reviews from critics and fans alike. This short UK tour includes two dates with their good friends, The Skints, while the London date is part of Till The Fest: a three-day independent punk festival featuring many luminaries of the UK underground. Crazy Arm headline the other four shows.

‘Dark Hands, Thunderbolts’ is a return to the rowdy guitars, epic choruses and Americana twang of Crazy Arm’s first two albums. This collection of songs finds the band in a reflective but no less indignant mood. It features the heaviest, the lightest and the most expansive songs that the band have recorded, with a strong cinematic influence at play, betraying their fondness for Ennio Morricone, Murder By Death and Constantines. Of course, their stock-in-trade – breathless punk rock riffola, Appalachian harmonies, syncopated rhythms, anthemic singalongs – are still very present and correct. 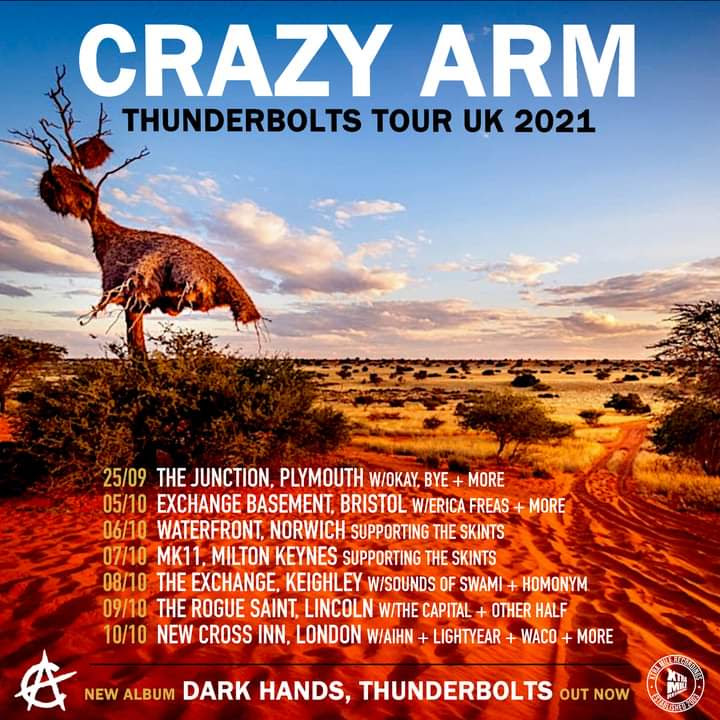 “A unique band at their very best” Punktastic

“Totally visceral and vital” 9/10 The Soundboard