SNAPSHOT OF THE LATE ROCK & ROLL ICON, WHO WOULD HAVE TURNED 95 TODAY, AT HOME IN LEGENDARY ST. LOUIS VENUE 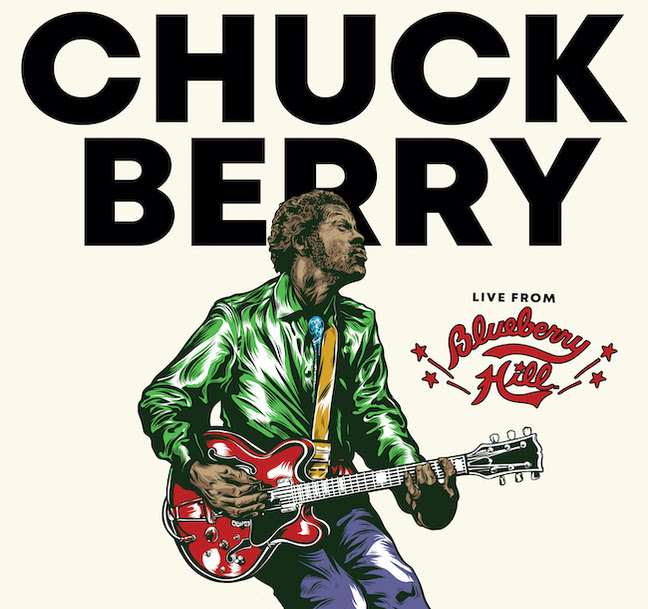 Today, on Chuck Berry’s 95th birthday, Dualtone Records announces the 17th December release of ‘Live From Blueberry Hill’, an indelible document of the rock & roll icon’s legendary hometown shows at St. Louis’ Blueberry Hill. Taken from performances recorded between July 2005 and January 2006, ‘Live From Blueberry Hill’ features Berry tearing through classics like ‘Roll Over Beethoven,’ ‘Sweet Little Sixteen’ and ‘Johnny B. Goode’ on the stage where he played more shows than anywhere else in the latter decades of his life.

By 1996, Chuck Berry had conquered the world and, once ‘Johnny B. Goode’ had been included on the Voyager Gold Record and sent into space, the universe. But one evening, in a conversation with Joe Edwards (longtime confidante and owner of the beloved St. Louis restaurant Blueberry Hill) Berry commented “You know, Joe, I’d like to play a place the size of the ones I played when I first started out.”

A lightbulb went off and a scheme was hatched. “Let’s do it at Blueberry Hill,” they decided. On a new stage that Edwards had christened ‘The Duck Room’ after Chuck’s signature onstage move, Berry would give 209 performances over seventeen years. Chuck Berry shows at Blueberry Hill became a rock & roll destination, inspiring pilgrimages by all sorts of luminaries: the Band’s Robbie Robertson, Motorhead’s Lemmy, Lorde, fellow St. Louisans Nelly and Bob Costas, to name just a few.

It’s this lineup that crystallises the free and spontaneous atmosphere of The Duck Room on ‘Live From Blueberry Hill’. Whether Chuck and the Blueberry Hill Band are retracing his musical lineage on his cover of the slow-burning blues ‘Mean Old World,’ spinning an origin myth on ‘Bio’ or reaffirming the vitality of the singular ‘Johnny B. Goode,’ ‘Live From Blueberry Hill’ is an exhilarating opportunity to hear one of the true giants of 20th-century music onstage and unfiltered.

Chuck Berry’s accomplishments hardly need elaborating: He was the first member inducted into the Rock and Roll Hall of Fame, a member of the Songwriters Hall of Fame, a recipient of a Grammy Lifetime Achievement Award and a Kennedy Centre Honour. John Lennon declared that Berry’s name was synonymous with rock and roll itself, while Bob Dylan called Berry the “Shakespeare of rock and roll.”

On Chuck Berry’s 90th birthday, he announced the release of final studio release ‘Chuck’, also released on Dualtone Records. NPR’s ‘Fresh Air’ described it as “wonderful…fresh and forward-looking,” while Rolling Stone said it “finds Berry raging against the dying of the light, but in a vulnerable and tender way his earlier music had not prepared us for.” The New Yorker said that “After all those years of duck-walking, crisscrossing the United States on tour, and giving his disciples and imitators hell, the man still had it.”