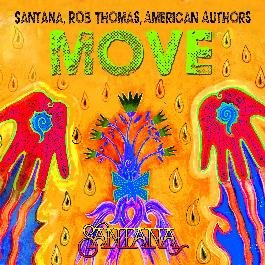 Multi-Grammy Award-winning Rock and Roll Hall of Fame guitarist Carlos Santana has announced that the first single from his star-studded, masterful new album, Blessings and Miracles, is “Move,” the much-anticipated reteaming of the music legend and guitar icon with famed Matchbox 20 singer Rob Thomas.

The knockout track, with also features the vocal talents of American Authors, will be released to radio on August 18, ahead of the full-length album, which will be issued worldwide via BMG on October 15, 2021.

Music fans have breathlessly awaited another pairing of Carlos Santana Rob Thomas, whose 1999 multiple Grammy-winning smash “Smooth” became a worldwide staple – and the two performers have smashed all expectations and turned in a new classic.

“‘Move’ came about was very much like how ‘Smooth’ happened,” says Santana. “It was like divine intelligence behind the scenes, and I just knew I had to record it with Rob. The song is about awakening your molecules. Ignite and activate yourself – you know, move. When Rob and I work together, we have a sound that’s splendiferous.”

Right out of the gate, the song is a winner. Santana’s vibrant opening guitar licks set things ablaze, and then we’re off on a grinding, grooving, swaggering, swaying and altogether breathtaking mix of pop and Latin rock with sure-fire hooks for days. Thomas is dynamic, sensual and utterly magnetic, and he’s ably backed by the punchy vocal talents of American Authors (especially the band’s Zac Barnett, who takes the lead spot in the second verse). Santana matches these supreme performances as only he can, with scintillating solos that explode with tectonic force. A lively horn section hits from all sides, and the song is highlighted by a hyper-drive chorus that defies inertia.

Ahead of the release of Blessings and Miracles, Santana and his band will mark their long-awaited return to the concert stage after a year off. On August 25, Santana will resume their multi-year residency at the House of Blues at Mandalay Bay Resort and Casino in Las Vegas (shows run from August 25 thru September. 4, with additional dates from November 3 thru December 11).

Santana’s Blessings and Miracles tour begins on September 11 at the Borgata Spa & Resort in Atlantic City, NJ, and will make stops in Richmond, VA, Orlando, Augusta, Tulsa, and more before it concludes on October 2 at the Choctaw Grand Theater in Durant, OK.

For more than five decades – from Santana’s earliest days as a groundbreaking Afro-Latin-blues-rock fusion outfit in San Francisco – Carlos Santana has been the visionary force behind artistry that transcends musical genres and generational, cultural and geographical boundaries. To date, Santana has won ten Grammy Awards and three Latin Grammys, with a record-tying nine Grammys for a single project for 1999’s Supernatural (including Album of the Year and Record of the Year for “Smooth”). He has received the Billboard Century Award (1996), was ushered into the Rock and Roll Hall of Fame (1998), received the Billboard Latin Music Awards’ Lifetime Achievement honor (2009), and was the recipient of the Kennedy Center Honors Award (2013). Among many other distinctions, Carlos Santana has been cited by Rolling Stone as #15 on their list of the “100 Greatest Guitarists of All Time” and has joined the Rolling Stones as one of only two bands to have an album reach the Top 10 in every decade since the 1960s.