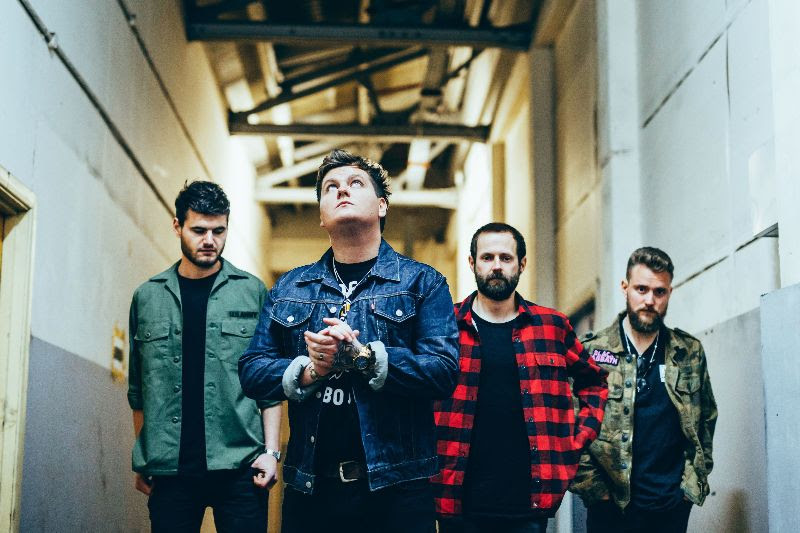 Birmingham rockers Broken Witt Rebels have just released the video for the title track of their new album OK Hotel.

Featuring super-8mm style footage of the USA along with backstage and performance clips, it’s a dreamily evocative, semi-nostalgic vision of the great American road-trip.

The band comment; “’OK Hotel’ was actually inspired by some of the places we have stayed in while touring in Europe but it’s also a song that really reflects how America hit us as four lads from Birmingham; the wide open roads, the imagery, it was a bit like stepping into the set of some of our favourite films growing up. The video nails that feeling for us. Ross Syner who directed knows how to express that visually.”

The track follows the band’s previous singles ‘Rich Get Richer’, ‘Running With The Wolves’ and ‘Money’, all of which feature on OK Hotel, their most confident body of work to date. Throughout the album’s 13 tracks, Broken Witt Rebels pay homage to their home- town, honouring their working-class roots and demonstrating their ability to craft songs that are honest and equipped for the 21st century.

OK Hotel has been praised by the likes of Classic Rock, Maverick Magazine, Planet Rock, Powerplay and more, and will be supported by a full headline tour of the UK this September, with dates rescheduled from the spring.

Broken Witt Rebels are one of Birmingham’s finest home-grown talents and an up ‘n’ coming force, delivering a modern, Nashville-rock-meets-cutting-edge-pop style that’s made for the 21st century.Inspired by the likes of Rival Sons, Kaleo & Alabama Shakes, their blues-tinged rock ‘n’ roll swagger is laden with gutsy guitars and anthemic hooks, giving them an infectious, arena-worthy sound that has seen them achieve critical acclaim and led them to stages across the US & Europe.

Since their incarnation in 2015, BWRs – comprising Danny Core (vocals), James Tranter (guitar), Luke Davis (bass) and James Dudley (drums) – have independently worked a series of EPs and released their self-titled debut album in 2017 (also via Snakefarm).

The releases have been supported by headline and support shows across the globe, including a Stateside run with Texan rockers Whiskey Myers, plus European dates with Blue October.

Broken Witt Rebels’ live portfolio also includes appearances at a host of major festivals, including Reading and Leeds, Download UK, Wacken Open Air, Camden Rocks and The Great Escape, and last year they finished off 2019 with a run of UK headline shows, including a date at London’s Boston Music Room.