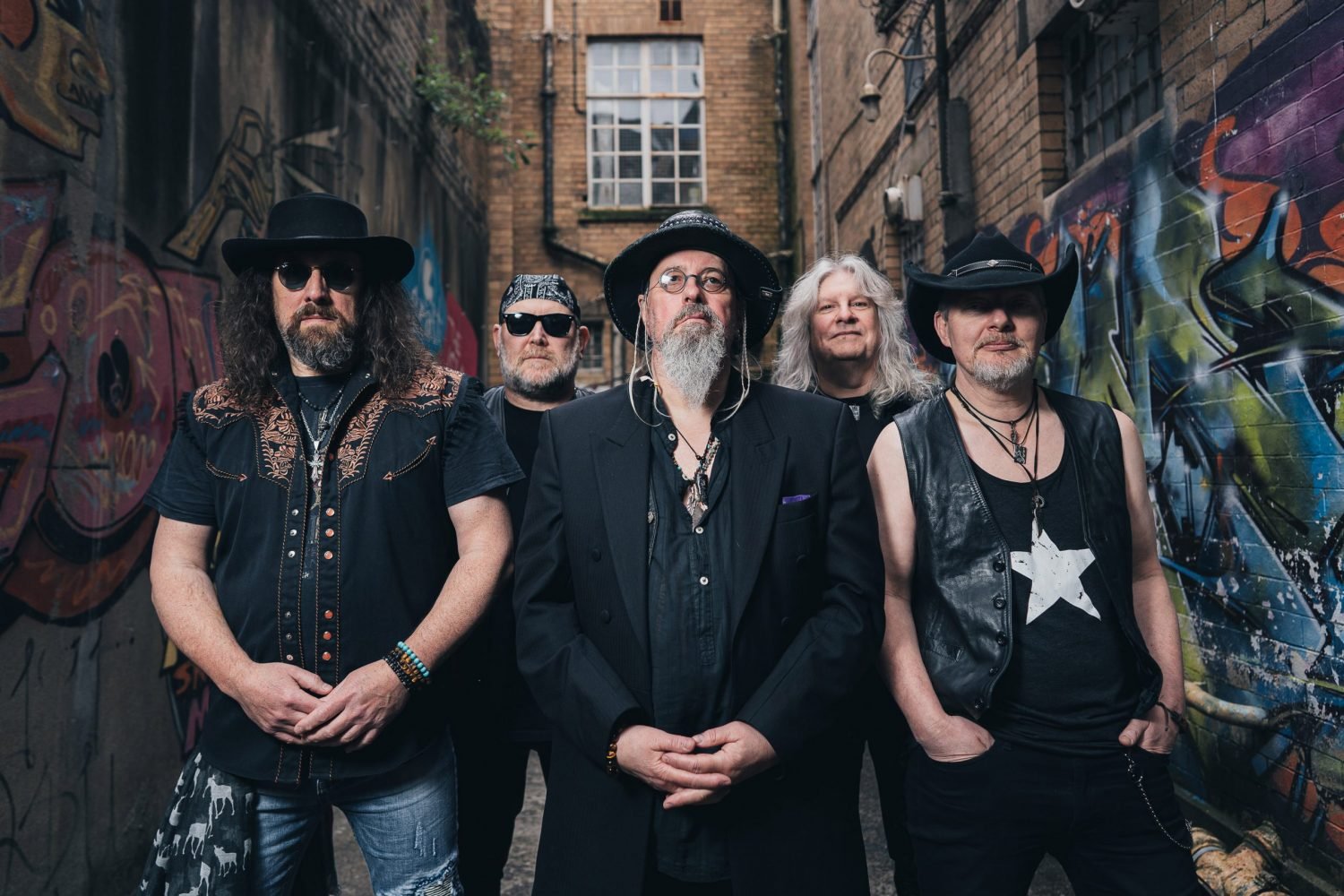 For anyone unfamiliar with Sons Of Liberty, how do you like to describe your particular brand of Rock ‘N’ Roll?

Moose: We’re definitely at the harder end of the southern rock spectrum, so for classic old school comparisons you’d be looking at Blackfoot or Molly Hatchet as a starting point. From there it gets a bit more modern sounding, so add a bit of Black Stone Cherry and later Skynyrd into the mix too, along with a big dollop of straight-ahead classic rock as well. Sam Morrison, a good muso-friend from the USA, said we sound as if Motley Crue came from Nashville, and we turned that into ‘Motley Hatchet’ which is kinda fun. You’ll find some blues and some country in there too, so it’s quite a melting pot.

You guys look like you have a wealth of experience, how did you guys come together and was it always the plan from the off to be a five-piece with two guitarists?

Moose: Yeah, the twin guitar thing just suits the southern sound perfectly, so that was always the plan from the start – I’m just about holding my own vs Fred if you don’t look too close! We actually started Sons of Liberty as a side project and we’d all known each other from various Bristol-based bands that we’d been slogging around the local pubs etc with. The band gradually became more of a focus for each of us that by the time we’d recorded our EP ‘Shinola’, it was only Steve that still had the last of his previous commitments.

Fred: Yep…following tradition it seems you have to have at least two or three guitarists to do the harder-edged southern rock thing…lucky we stopped at two really!

How was 2020 for you guys, apart from the obvious, did the lockdown provide you with an opportunity to refocus/regroup or did it just stop the momentum in its tracks?

Moose: We were really productive in 2020. We had just started work on some new material when the first lockdown kicked in around late-March, and we managed to keep the momentum going from there by file sharing ideas and working up some initial song outlines. Fred and Rob did some amazing remote work on this for quite a few months, until we were able to get back into the rehearsal room at Firebird Studios in early July. From there we ended up with around twenty completed songs fairly quickly, plus some daft video footage and even a live set shot specially for one of the NWOCR Webfest sessions with thanks to the guys at the Electric Banana in Weston Super Mare for opening up and hosting us.

You just dropped your sophomore album Aces & Eights, recorded in Dec 2020. Was this always the plan or did you have to adjust the timeline due to the pandemic?

Moose: I think the pandemic actually gave us more time to write and arrange ‘Aces & Eights’ than we would have had under normal circumstances, so we’re probably a bit ahead of our original plan. We were also lucky that some of the COVID restrictions eased up a bit in December, so we were able to get into the studio for the best part of two weeks. We found some cool accommodation and a couple of pubs in South Devon opened up special just for us in the evening.

Working with renowned UK Producer Josiah J Manning (Kris Barras Band, Inglorious, Wille and The Bandits), what was that relationship like and how do you feel relinquishing control over your music for the producer to get the absolute best out of it?

Moose: Josiah was amazing. We went through a remote pre-production process with him by sharing rehearsal recordings and building his comments and suggestions into the final arrangements and also using him as part of the final song selection. He’s a bloody genius in the studio though, with a fantastic ear for detail, so adding him to the SoL-team was perfect. I don’t think at any time we felt as if we’d lost control of the music, but he most certainly got the best out of us individually as well as the best out of the songs.

Fred:  It was a great experience, seeing our original songs take on more depth and colour; Josiah was brilliant at building on what we had already created. It felt very collaborative and he has a great way of working with artists, so you don’t feel you are losing control at all…it helps hugely that he is also a very accomplished musician too.

Are there any particular tracks on the album that are your personal favourites and if so, why?

Moose: I think we all have different favourites, and the tracks are quite varied so it’s hard to pick just one or two. ‘Ruby Starr’ is right old rocker, ‘Black Blizzard’ and ‘I Come In Peace’ are a bit more epic in feel, and there’s some fun too with ‘Doc’s Remedy’ or ‘Whiskey Is My Vaccine’. Don’t Hide Behind Your Weakness has been great to play live.

Fred:  I think we all have slightly different personal favourites,  choosing one is a bit like choosing your favourite child!  Having said that, I am really pleased with how ‘Don’t Hide Behind Your Weakness’ turned out as I felt that song had a lot of potential from the very start and I just love the chorus in ‘I Come In Peace’…and I love ‘Ruby Starr’…and ‘Black Blizzard’, i fact, all of them!

There is a lot of talk about the new norm beyond Covid and the impact in its wake, how do you feel the music industry is placed moving forward and do you think any kind of reset is required within the industry to bring its fair share back to the artist, especially those working their way up.

Moose: The pandemic has impacted venues, promoters and agents as well as bands, but hopefully the best will have made it through! The handful of gigs that we’ve been able to play recently makes it 100% clear that the fan base is still out there chomping at the bit to get back to live-action, so fingers crossed for a positive second half of 2021.

Fred:  I think we just have to work with how the industry is really, as independent rock artists we probably can’t influence that too much as far as low streaming revenues and payment distributions favouring the major artists go. Music fans need to keep buying physical products from the bands to ensure they have some income. As Moose said, the more people who support the grassroots venues and festivals the more the organisers can share with the upcoming bands. Every well-known band was new once so we need to see people getting back out to shows – support the live scene, good people!

Moose: Gigs! Hopefully anyway, we have a couple of singles in the pipeline too, plus the vinyl version of ‘Aces & Eights’ towards the end of the summer.

Fred: In the short term we have the new album to tour and we’re also looking to play overseas and sort out some support shows with some well known artists. Watch this

Sons Of Liberty are:

The band have a full UK tour and festival dates throughout 2021 which can be found here: www.sonsoflibertyband.com/tour 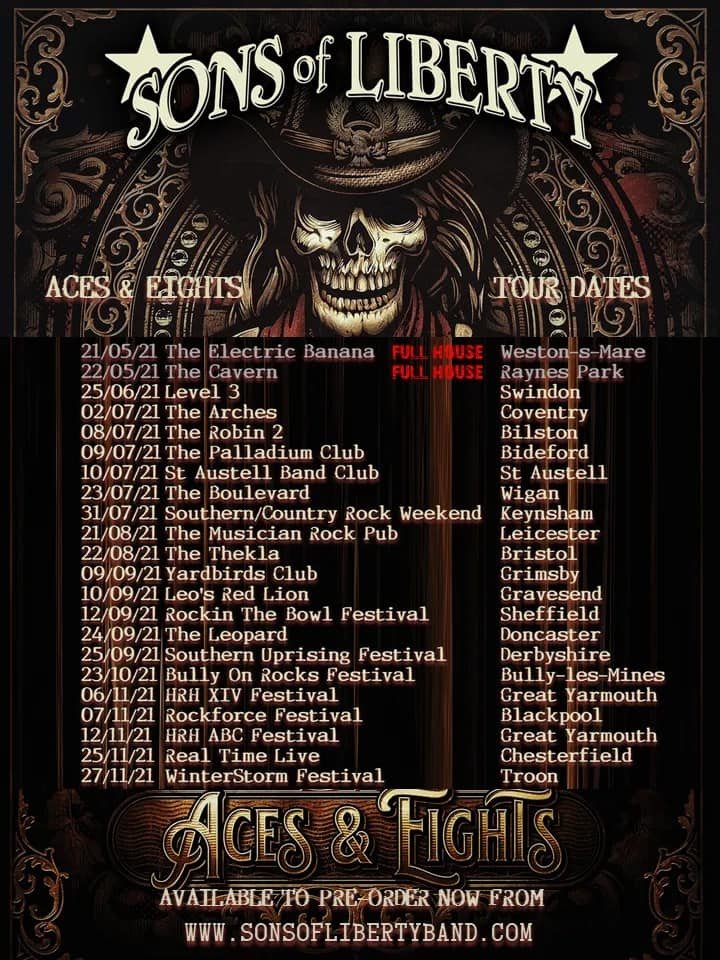