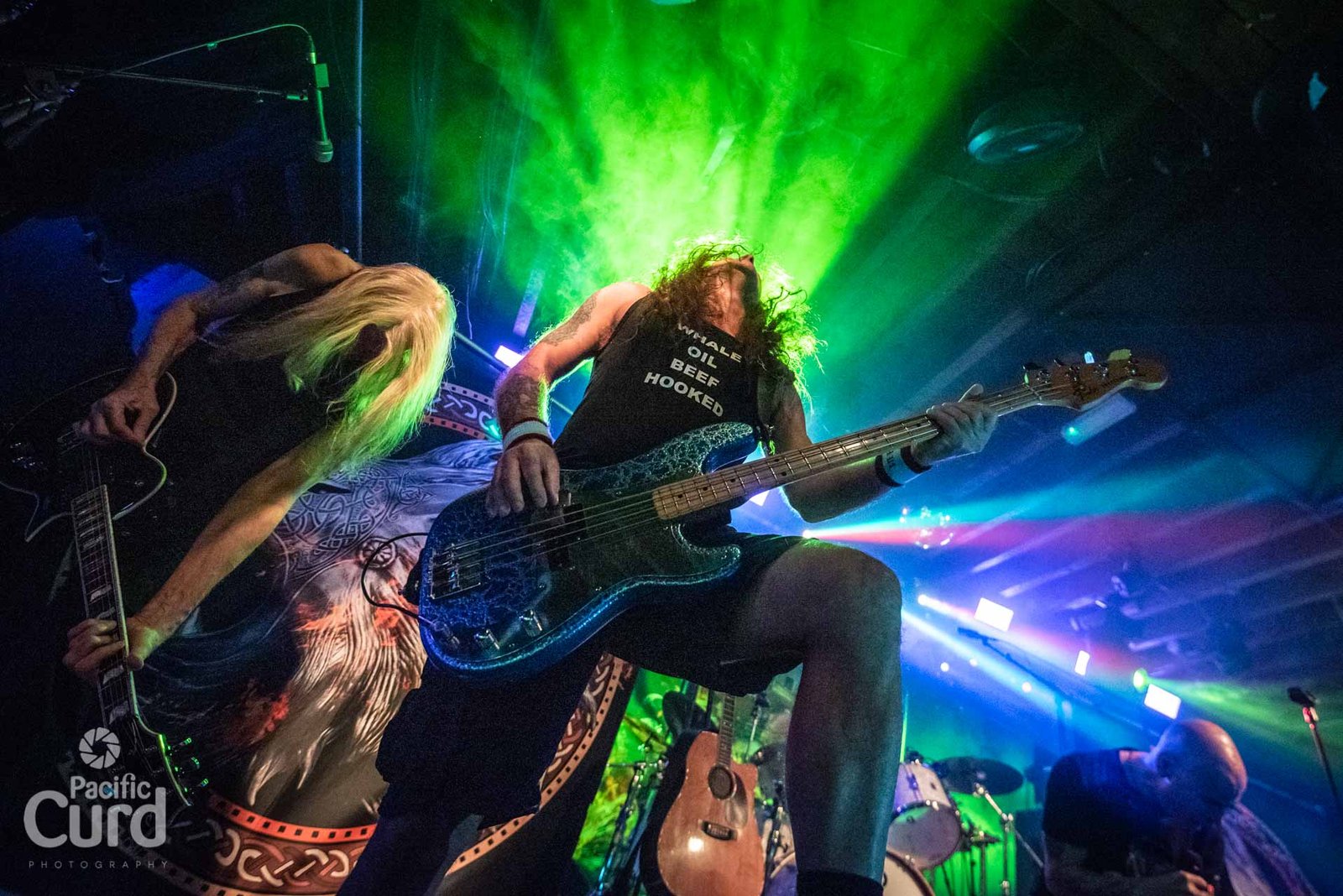 A bitterly cold Monday night in central Bristol saw British Lion headline the stage at the newly revamped music venue, The Fleece.  Those who already know, the four-piece metal band brought together by Iron Maiden’s infamous bass player Steve Harris, were due to support The Darkness until Covid protocols interfered. But some quick thinking resulted in a whirlwind UK Tour lasting until mid-December where support was from recently reformed British Heavy Metal band Airforce.

There was quite a queue considering the ever-decreasing temperature outside, as punters lined up with little on, other than the obligatory band T-shirt.  The doors were open at 7.30pm on the dot and everyone headed in with Covid passes at the ready.

In no time at all, graced the stage with ex-Iron Maiden member Doug Sampson on the skins, original Airforce member Chop Pitman on guitar, Tony Hatton on bass and new vocalist Flavio Lino to complete the set. The venue was pretty much full already, so a head start to the night as they ploughed into their first track ‘Fight’.

It’s got to be said, the power they produced from the onset was full-on old-school heavy metal. Sampson tackled that bass drum pedal brandishing a pair of boxing boots, whilst Pitman and Hatton randomly paired up to give their guitars some welly, before swapping sides of the stage. Lino was left to fill in the gaps, grasping his mic with both hands as he shut his eyes, tipped back his head and let those lungs release soaring vibrato vocals.

Just as the venue was getting warmed up, the band faced a little ‘glitch’ – shall we say. Not just the once either, as a guilty member of the band had got ahead of themselves by playing the wrong track. It didn’t matter though – all part of the show as it was laughed off in a flash.

Every track was crammed with those resonant power chords and shrilling guitar solos as one would expect – not forgetting the impetus drums and the odd fist pump in the air. Airforce had it all. And crowd interaction was a must to keep the party going.

‘Band of Brothers’ was a track dedicated to the crowd before Lino announced that they had two more tracks left on the set list. “These are both 15 minutes each”, he jests, “but this one is gonna be a fast one!”.  ‘Finest Hour’ it was – in more ways than one. The band were obviously in their element with plenty more to give, as their last track ‘Sniper’ was aired. But of course, there had to be some kind of finale to end the set – this being a timely hiatus that allowed Lino to unleash one more almighty, lingering holler before the set drew to a close.

There was no doubt that Airforce had made a lasting impression on the crowd by providing some healthy competition for the main contenders of the night. Eight tracks done and dusted, the crowd were then entertained with tunes from bands such as Nirvana and The Clash to keeps spirits high whilst having the chance to grab another pint and hit the new refurbished lavatories!!

There was quite a long interval whilst the crew cleared the stage and the techs did the usual sound check – first the drums, then guitars and lastly the mics.  A few British Lion T-shirt’s were dotted about as the crowd eagerly awaited holding their drinks and getting their phones out ready. Although the band had only formed in 2012, Steve Harris has been a household name in the Heavy Metal world for many years. You just couldn’t help but feel very privileged to be part of this intimate gig at the beginning of the week. It must also be known that his eldest son George played this very venue a couple of years ago, in his band named ‘The Raven Age’ – with the band going on to support Iron Maiden on tour. But the whole idea of forming British Lion was to enable Harris to play those venues that were a contrast to what Iron Maiden had become accustomed to.

Once the sound check was complete, it was guitarist Graeme Leslie first out on stage, shortly followed by Harris, vocalist Rich Taylor, lead guitarist Dave Hawkins and drummer Simon Dawson.  Leslie wasted no time and got in a quick warm up before throwing on a guitar from the adjacent rack, as the band hurled in to their first track of the night ‘This is my God’, which also happens to be the first track on their first album.

Whilst vocalist Taylor took centre stage, Leslie was sporadically joined by Harris for a joint mosh, as was guitarist Hawkins who remained firmly on one side of the stage throughout the night.

For this music genre, it was also quite refreshing to see the drummer of the band
in full view – well, those who were lucky enough to be able to see over the new 5ft high stage that is. For Dawson, it was the prime opportunity to exhibit his aptitude on that shiny kit, as he zealously wielded those drumsticks at any given moment.

The band’s set list was a hefty one, but they dished out the tracks like candy to a kid.
Half an hour had passed and it was time for some introductions from Taylor.  It was also time for the band to have a bit of a breather and grab a drink. ‘So how are y’all doing?”, he asked the crowd.  As they cheered, he went on to talk about the tour and the consequences of the pandemic. “A lot of anger and energy has built up over the last year or so and now we’re ready to let it go on stage”. True to his word, the next track was a favourite from the band’s second album ‘The Burning’, called ‘Spitfire’, which Taylor sang with such passion and emotion. A mega track to play in a venue of this size. The kind you’d imagine being played at a stadium with a gargantuan light show, Marshal stacks either side of the stage and the lead guitarist singled out with a spotlight as he performed an epic solo. But here we are, in the centre of Bristol on a regular Monday night. Despite the size of the venue, British Lion performed no differently as they utilised all available space on the stage and infused it with their energy.

By now, many pints of beer were being held in the air along with ‘horns’ and the night was in full swing. Taylor refrained from talking about each track as he ‘let the music do the talking’, as he picked up his semi-acoustic guitar ready to play.

There was a decent selection of power ballads within the set, as Harris continued to show his fancy footwork on stage, Dawson covered every possible beat in a bar whilst Leslie shook his mane playing guitar.

Another track taken from their second album was ‘Us Against the World’, with bass that rumbled under the floor sending shockwaves up through your body.  The chaotic lighting and reckless tempo had the arms of the crowd in the air to clap. To keep the momentum going, Harris travelled side to side on the stage, putting one foot on a monitor to lean over and sing to fans.

The night was nearly over as the lights turned white to highlight the crowd. Tonight, there will be no encore – just two more tracks from their first album. But not before Taylor had gracefully introduced all members of the band.

‘A World without Heaven’ and ‘Eyes of the Young’ finished the set on a much more mellow note, although the bands enthusiasm showed right until the very end. Taylor reached out to the crowd with his mic to hear their echoes and of course, no show should end without the customary extended drum solo, which was played to perfection by Dawson.  Those crashing cymbals were played simultaneously as the crowd cheered and whistled. “You’ve all been fantastic, thank you”, Taylor bellowed. As the lights came on, plastic cups were collected and some stayed behind to take a last trip to the merch stand in the hope that one or two members of the band may show their faces.

So, did British Lion enjoy being back on stage? The smile on their faces was a dead giveaway. Long may that continue as they head into the rest of their UK Tour with Airforce by their side.

With the recently announced European Tour in the summer of 2022 and a handful of festivals, they’ll need to reserve their energy during the coming months. Steve Harris on the other hand, will be flat out with Iron Maiden’s ‘Legacy of the Beast Tour’ to also execute. There’s no stopping this guy.  What a Legend.

Support act for the tour is Airforce, except for Dover where it will be Wicked Stone*. There will be no support in London**

Tickets are on-sale now and available from www.britishlionuk.com.