The album “Unholy Hymns” of the dark folk musicians from Portland will be released on August 13. 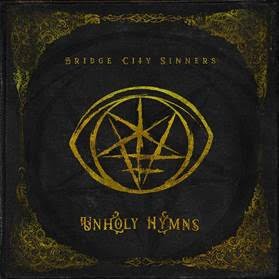 Portland, Oregon. Dark folk? Pre-war jazz? Murderfolk?  Folk punk? Blackgrass? Nailing down the genre of the Bridge City Sinners has always been difficult, but the title of their upcoming album sums it up in two words, “Unholy Hymns.”  With a lineup of banjo, fiddle, upright bass, banjolele and guitar, they take acoustic music in a new, much darker direction. The album will be released Aug. 13 on Flail Records and SBÄM Records, with the first single, “Pick Your Poison,” out May 14.

From the misty, pine-covered hills of the Pacific Northwest come the Bridge City Sinners, who trace the arc from Prohibition-era jazz to Appalachian death folk. This traditional string band bends the meaning of the word “genre,” playing festivals like Punk Rock Bowling, Muddy Roots and the Bluegrass String Summit in Oregon. They began their journey playing sidewalks across the country, and now this super group of musicians is on the national touring circuit. The Sinners stay true to the DIY mentality, releasing their albums on their self-founded record label, Flail Records.

The band around icon Libby Lux, which has become downright internet hype, is already scratching the Billboard charts in the U.S. – here in Europe they have already toured with bands like Days N Daze.

The first half of Unholy Hymns, “Book l,” relies heavily on their usual dark yet playful folk and jazz roots while expanding their discography to include complex themes of addiction and mental health issues.

The second half of the album, “Book ll,” leans much deeper into the darkness. This short concept album within an album is an epic of terror and sorrow, full of orchestral arrangements and wicked screams of despair.