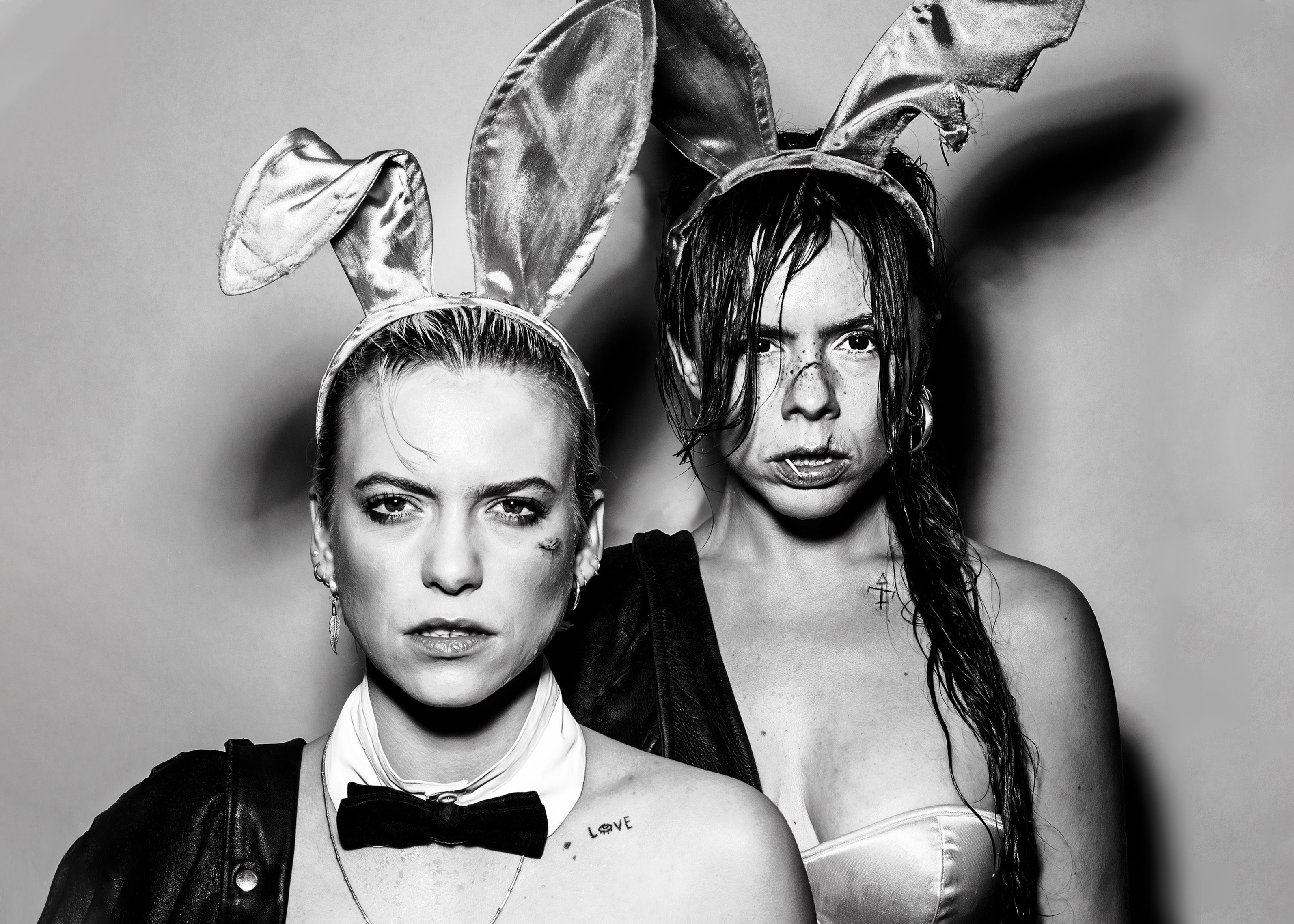 Today L.A.-based, London-bred duo BONES UK – comprised of vocalist Rosie Bones and guitarist Carmen Vandenberg – have shared a video for their new single “Filthy Freaks“. The track is taken from their upcoming self-titled debut album, out on 12 July via Sumerian Records.On “Filthy Freaks”, the band twists the narrative of societal expectations of beauty into an all-out celebration of the perfectly imperfect. Watch the video HERE.

While working on ideas for the video, vocalist Rosie Bones waded through concepts of powerful women, women with control over men and female icons that are painted as ‘feminine’ and ‘soft’, but still maintain a darkness and great power. It was when she came across a quote about Sirens that she hit upon the concept: the idea of Sirens sitting atop a landfill of rubbish and men, making a statement of empowerment and contributing to today’s social commentary.

Rosie explains: “Mermaids nowadays have this reputation of being very ‘girly’ and a bit ‘sucrose’. Loved by little girls. BUT I went back to the fact that in Greek Mythology they were TOUGH. Feared in fact. I came up with this phrase ‘URBAN MERMAID’ and started going down that rabbit hole, asking: “What would mermaids look like…have to deal with… if they lived in todays oceans?”

“They wouldn’t be conventionally ‘beautiful’ or ‘pristine’. They would be scarred and damaged, missing arms through speedboat accidents. Their tails wouldn’t be glittery and polished, they would be tough like a cod’s tail, with piercings in their fins. Their hair, not well brushed and flowing but tangled and ratty – with various plastic treasures caught amongst their braids.”

“The whole video once again touches on a theme we play with a lot musically, that you can be tough and feminine, powerful and vulnerable all at the same time. The song ‘Filthy Freaks’ is about just that. That we should embrace our quirks and eccentricities. Let’s be proud to be freaks.”

For BONES UK, every song is a chance to speak their minds with total freedom, to shed light on the extreme disconnect between the status quo and the far more glorious world inside their heads. On their self-titled debut album, the duo confront everything from the beauty industrial complex to toxic masculinity to music-scene sexism, embedding each track with choruses primed for passionate shouting-along. Out 12 July on Sumerian Records, BONES UK is an album that’s both provocative and endlessly exhilarating, even in its most outraged moments.

True to the band’s anti-conformist spirit, BONES UK unfolds with an entirely uncontainable sound, a riff-heavy collision of rock-and-roll and rough-edged electronic music. In forging that sound, Rosie and Carmen worked in close collaboration with producer Filippo Cimatti, who shaped the album’s kinetic textures with lavish use of electronic bass. Matched by Carmen’s masterful yet inventive guitar work and Rosie’s magnetic voice—an instrument that seamlessly slips from menacing to stunningly tender—the result is a bold new sonic world, savage and frenetic and infinitely mesmerising. 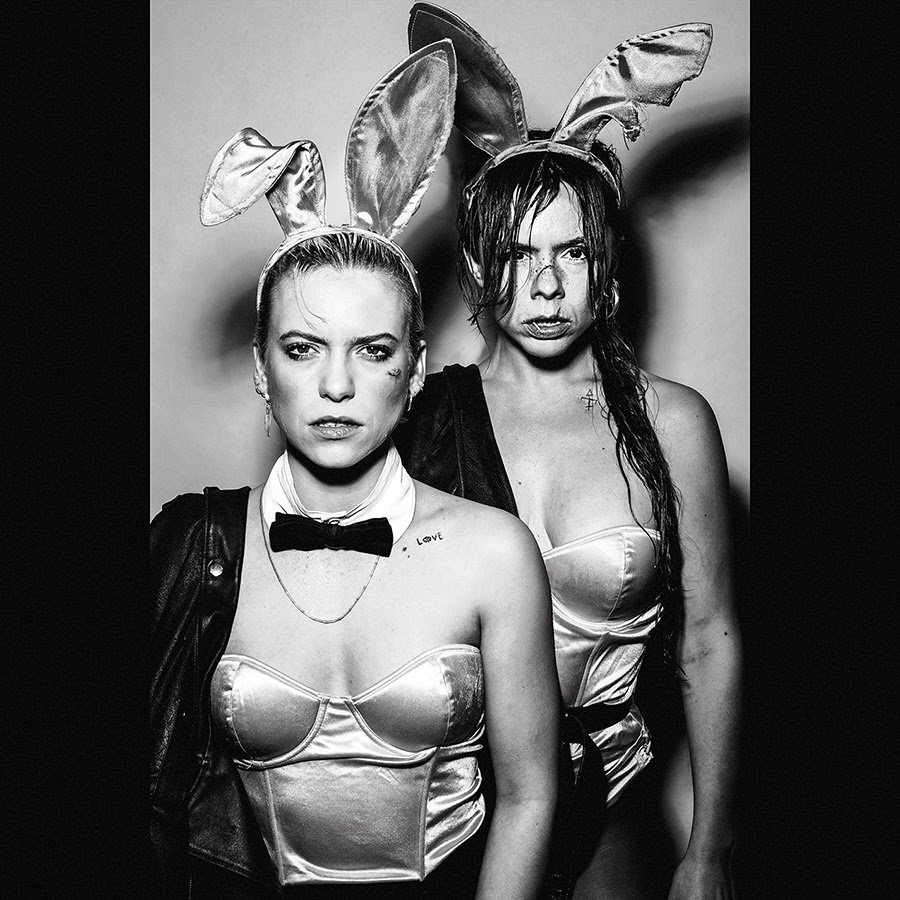 A full list of tour dates can be found below with more to be added:

Growing up in Italy, Carmen began playing violin at age five, but soon felt compelled to take up guitar. “My dad played me a VHS of Woodstock, and when I saw Jimi Hendrix I just went, That’s what I wanna do,” she recalls. Classically trained in guitar from age six, she later ventured into blues and rock, eventually crossing paths with Rosie after playing a 2014 gig at a blues bar in Camden. “I went up to her afterward and we drank several bottles of whiskey, and we pretty much started playing together right away,” says Rosie. Born and raised in London, Rosie had gotten her start as a drummer but switched to guitar as a tool for her songwriting. “It’s always been all about the lyrics for me—using songs to tell stories and paint a picture, in a way that actually says something about the world,” she notes. Rosie also designs all the artwork for BONES UK, with the band working together to create each of their outrageously cinematic videos.

After recruiting Filippo (a former classmate of Carmen’s at The Academy of Contemporary Music in Surrey), BONES UK began pushing toward the complexity that now defines their music. “We all come from such different backgrounds, and BONES UK is the amalgamation of that,” says Carmen. “When we realized what we could create together, it was like we didn’t have a choice—we had to just keep going.” Moving to L.A. in 2017, the band made their name as an explosive live act, soon taking the stage at major festivals like Lollapalooza and touring with bands like Stone Temple Pilots, Highly Suspect and The Cult, and receiving press accolades from NYLON, Consequence of Sound, Chicago Tribune, REVOLVER and Premier Guitar, to name a few.

BONES UK approaches their live set as the ideal medium for their ever-expanding message, a vehicle for both catharsis and transformation. The band will declare this message all summer long, first by joining an all-star lineup for the Strange 80’s Charity Fundraiser at The Fonda Theater, performing alongside Gavin Rossdale from Bush, Jesse Hughes from Eagles of Death Metal, Atlas Genius + members of No Doubt, Jane’s Addiction, Velvet Revolver and Weezer. They then roll into the Mad Decent Festival at Gillette Stadium in July and onto the newly announced dates with The Struts.

“Music is the most powerful platform you could possibly have because it has the potential to move people in so many ways,” says Rosie. “We feel like we have a duty to use our platform to talk about the things we care about, and hopefully end up empowering and inspiring people, and help give them the confidence to be who they really are.”