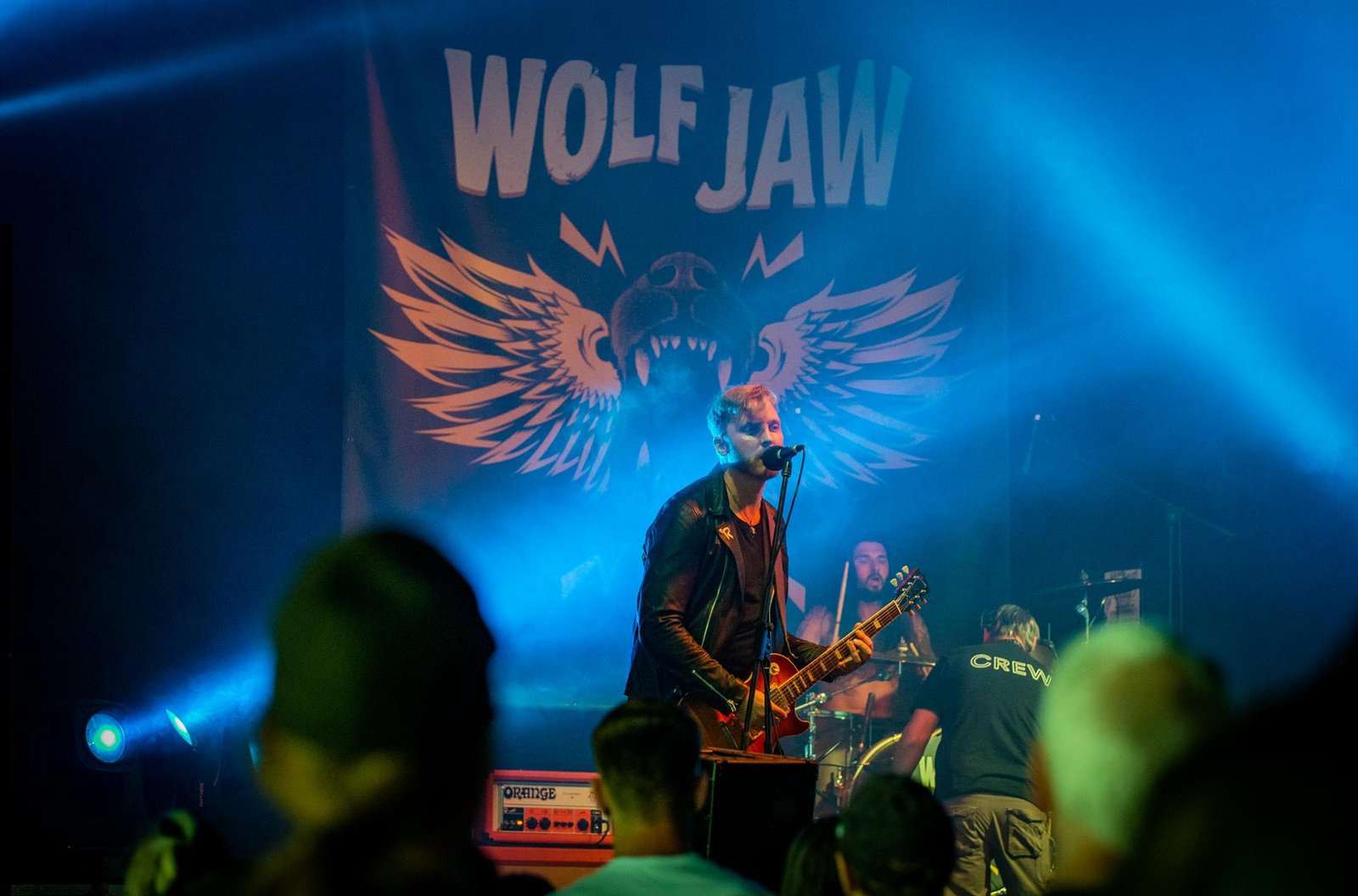 In a welcome change of pace three piece rockers Wolf Jaw take to the Sophie stage with their signature Blues-infused rock with actual old fashioned guitar solos n’ all! Who knew they were still a thing! These guys bring a breath of fresh air to proceedings and the crowd pours in as Orang Goblin finish their set on the main stage.

Wolf Jaw we’re piling up the miles prior to the pandemic grafting away and building up on that reputation, so it’s good to see them once again doing what they do, rocking the fuck out and bring a smile to the faces of those in the crowd. Glad to have you back ladies.

Wolf Jaw formed from the depths of the Black Country in 2014 comprised of lead vocalist and gui-tarist, Tom Leighton, whose signature riffs, fuzz emotive guitar and pure vocals have distinctive sound unlike anybody else. Bassist Dale Tonks provides a deep heavy groove and tasty bass runs that underpins Karl Selickis’ chest pumping drums and impeccable rhythmic feel. The combination of these three formidable players makes Wolf Jaw a force to be reckoned with, forging a sound steeped in the raw, passionate energy of the Black country’s 70’s heroes, but, at the same time, keeping the vibe very much in tune with the 21st century rock sensibilities. Wolf Jaws sheer raw power, passion and nostalgia has given them a unique sound that can only be described as “thunderous rock and roll”. Every time the power trio hit the stage, their audience will be subjected to rollercoaster guitar riffs, solid grooves and choruses that will have them singing all the way home. Wolf Jaw have a knack for ensuring that you won’t be forgetting them in a hurry. In the formative years of 2014/15 Wolf Jaw (then The Bad Flowers) gained a reputation for their energetic live shows in local pubs, clubs and venues cutting their teeth with the local older and more experienced musicians and soaking up as much stagecraft as possible. During this productive time of wild abandon, the band released the Vicious Lullabies EP and Killing Time EP’s. 2016 saw a self-titled EP that included the songs City Lights and Big County. Both songs were writ-ten whilst the band were on the road in Europe for their first continental shows in Austria and France.

The EP also included Can you Feel It? and Run, Run, Run – both high tempo modern-day tales of frustration and reckless rock and roll. That same year was a breakthrough in terms of live shows. Wolf Jaw left the local venues in a wake of blood, sweat and ringing ears when they opened for Canadian rockers The Sheepdogs in Birmingham, then onward to extensive tours up and down the UK to packed venues with Crobot, Jared James Nichols and Scorpion Child, plus an appearance at Hard Rock Hell Festival. 2017 has since seen The Bad Flowers continue their relentless live schedule by supporting the likes of Tyler Bryant & The Shakedown including a crazy night of raw blues and heavy riffs in a sold out Camden Assembly. Then on to shows with Dan Baird and The Homemade Sin, Toseland, a festival appearance at Wildfire in Scotland and crossing the channel for European shows in Germany at Wild at Heart, Berlin and Austria’s Vienna U4 where such legends as Nirvana, Stone Temple Pilots and even Prince have played. Between tours and live shows, Wolf Jaw recorded their forthcoming debut album ‘Starting Gun’ at Vigo Studios, produced by Adam Beddow (Diamond Head). In February 2018 the band released their highly anticipated album Starting Gun. They supported Stone Broken on their February/March UK Tour alongside Jared James Nichols. The album spawned to radio tracks on Planet Rock Thunder Child and Hurricane. The summer of 2018 saw Wolf Jaw play several music festivals including Steelhouse, Stone Free at London’s O2 arena, Hard Rock Hell, followed by Planet Rockstock in December. Wolf Jaw also completed there first headline tour in September of 2018 along side Federal Charm and Those Damn Crows which saw the band grow from playing 30 minute opening slots to 1 hour relentless sonic assaults. 2019 saw the band sign to Listenable records for the release of their second album ‘The Heart Won’t Listen’ on October the 25th to yet again great critical acclaim. 2019 was also a big year in terms of festivals and touring, the biggest show in the bands career was playing at Download festi-val, Donington Park not once, not twice but three times on different stages over the course of the weekend. they also toured with Crobot in the summer around the UK although on the penultimate night of the tour had their van stolen containing all of there gear. This didn’t stop them and with the help of friends, family and fans alike gathered more instruments and amps to keep the heavy fuzz groove rolling. Late October into early November Wolf Jaw toured the UK and Europe with Nash-ville rock band Goodbye June and was an extremely successful first real trip onto the continent. 2019 ended with a support slot at Londons Shepherds Bush Empire with New Zealand legends Shihad. 2020 See’s continued touring with 3 weeks planed in Europe with Jared James Nichols as well as many more festivals.

We can’t wait get to Bloodstock and hit the stage with the bands at this incredible festival. 2020 has an amazing line up and to be playing the same day as Judas Priest is an honor for us, Rob Halford has been mentioning us in in interviews and has I think become a fan of the band. Must admit Bloodstock is a festival we’ve always been a fan of, its local to us, but its not a festival we ever thought we’d play, but with our heavier sound and Bloodstock branching out as the festival grows, its a perfect combination! We can’t wait to show everyone what we’ve got and what we are about, we’re gonna get some more people on board with the Heavy Fuzzy Groove