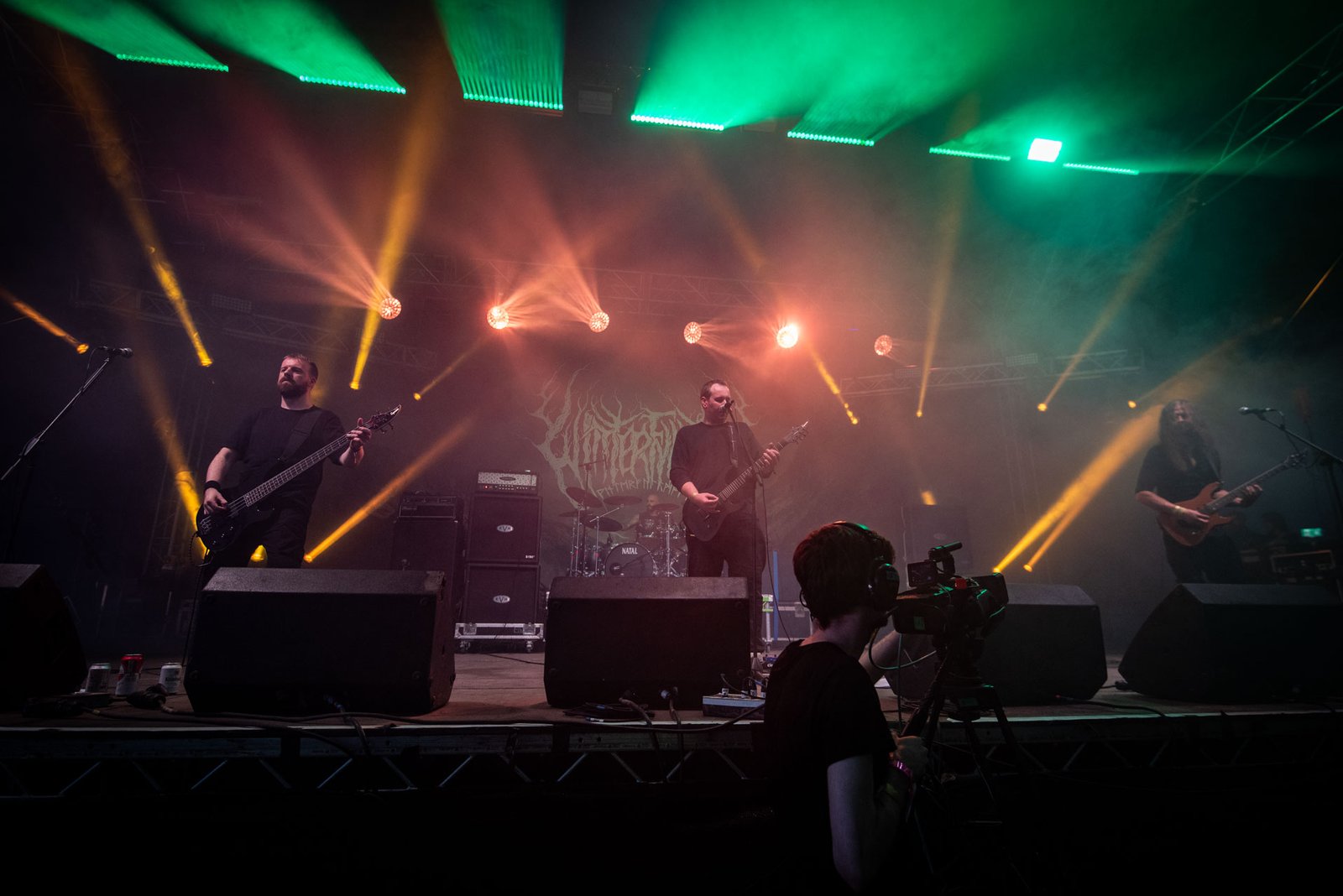 Winterfylleth formed and released their first demo Rising of the Winter Full Moon in 2007, after which they rapidly gained attention in the metal underground, earning them a record deal with Profound Lore Records, who would go on to release their debut 2008 album The Ghost of Heritage. The release was critically well-received and garnered the band considerable attention within the black metal scene. Following this release, Chris Naughton and Simon Lucas were joined by Nick Wallwork and Mark Wood, completing the line-up that would remain until 2015. Winterfylleth then set to work on their second full-length album, The Mercian Sphere, which was released on Candlelight Records in 2010. Again, the release was a critical success (Terrorizer magazine ‘Album of the Month’ and 20th Best Album of 2010) and propelled the band to international success. This new-found recognition landed the band high-profile appearances at a number of top metal festivals including Roadburn, Wacken Open Air, Hellfest, Graspop and Bloodstock Open Air.

Winterfylleth released their third album in 2012, The Threnody of Triumph, once again to widespread critical acclaim. This release again obtained Terrorizer magazine’s Album of the Month and 15th Best Album of 2012. It also was ranked as the 12th best album of 2012 by Kerrang! and made the top ten lists of many Kerrang! contributors that year as well. In March and April 2013 Winterfylleth toured with and supported Enslaved on their Spring Rite European tour. Later in the year, the band returned to Graspop Metal Meeting for the second year running and soon after made their Summer Breeze Open Air debut. The first half of 2014 saw two releases from Winterfylleth. The first, released in January, was a split EP on vinyl with Ukrainian black metal band Drudkh entitled Thousands of Moons Ago / The Gates which featured covers of bands that have influenced Winterfylleth and Drudkh. The second, released in May, was a compilation album entitled One And All, Together, For Home, (on which Winterfylleth participated) and featuring folk songs recorded by various metal bands including Primordial, Kampfar and, once again, Drudkh. In July 2014 Winterfylleth announced that they planned to release their fourth album, The Divination of Antiquity, in October 2014. Again the release made an album of the month in many metal magazines, and also landed the band on the front cover of Terrorizer magazine. In 2015, they received the award for “Best Underground Band” at the Metal Hammer Golden Gods Awards. On August 2, 2016, the band announced the album cover and title of their fifth full-length album, “The Dark Hereafter”. They released the track ‘Ensigns of Victory’ in advance of the album’s release. Following on from their successful 10 Year Anniversary Tour (in Sept/Oct 2017), Winterfylleth, returned in 2018 with their new, 6th album The Hallowing of Heirdom this time with an entirely acoustic album comprising of 12 brand new tracks. It is widely known that Winterfylleth has always incorporated influences from Traditional English Folk Music into the creative processes of their previous albums, but on ‘The Hallowing of Heirdom’ the band truly explored this area of their sound to the fullest extent. The album drew on lyrical and conceptual influence from ancient folklore, pastoral poetry, riddles, rhymes and odes, as well as early British customs and practices, Now cemented with a stable new line up since 2014’s ‘The Divination of Antiquity’, Winterfylleth have drawn on their collective skills across a wide variety of musical styles to incorporate interesting, new instrumentation and textures into this album, and in doing so have created what will surely become a new classic of this genre.

Moving into late 2019, Winterfylleth has recorded a new Black Metal album for release in 2020. More details will follow “Coming from the UK, we have always found there to be something special about the weekend of Bloodstock Festival each year. Whether we are performing at it or simply attending as fans, it is something we all look forward to, and have gotten a lot out of, over the years. It is a genuine focal point on the calendar for lots of fans and, to its credit, it has become a welcoming community for people into Metal music from all over the world, as well as an entity unto itself in terms of UK music festivals. Bloodstock has always been the only domestic open-air festival to really focus on giving a stage to great developing bands from the underground, as well as bigger headlining bands from all over the world. They were also the first major festival to take a chance on adding an up-and-coming Winterfylleth to their lineup almost 10 years ago; something for which we will always be grateful. Back then, playing the festival coincided with us releasing our second album ‘The Mercian Sphere’ (our first for Candlelight Records) and was a huge platform through which we were able to launch that release. It was also the first time we had performed those songs on such a national platform. Having done so, our profile grew very quickly on the back of this and we were able to push the band forwards to where we find ourselves now. We have been fortunate enough to have been asked back to perform at the festival on a number of occasions since those early days, and it has always felt like ‘coming home’ when we do. When we were asked to come back and play at the festivals 20th-anniversary edition in 2020, we were all absolutely thrilled. We have recently finished a new, metal album that will be released in mid-2020, so this feels like a perfect opportunity for us to have our own 10 year anniversary of playing the festival, and with some fresh new songs. We hope to see you there. Chris/Winterfylleth”