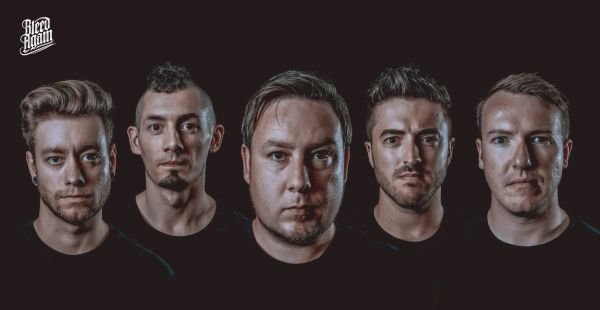 BLEED AGAIN
EXCITING METALCORERS ANNOUNCE NEW ALBUM AND MORE!
Formidable Brighton metallers BLEED AGAIN will reveal their towering sophomore album, Resurgence, on Friday 29th October. The imposing heavyweights have also released their engulfing new single, Victim. Check out the lyric video, here – https://youtu.be/0jkZrz-cMXs
Ravaging your senses from the South Coast of England, BLEED AGAIN were originally conceived at the end of the 2000’s, yet it wasn’t until 2015 that the band began to rack up widespread attention. Successful shows with the likes of Soil, Darkest Hour, Devil Sold His Soul, King 810, Death Remains, and Feed The Rhino generated great interest. Extensive touring throughout Europe, alongside a series of prestigious festival appearances at Amplified and Mammothfest, all added to BLEED AGAIN’s upward trajectory. The stout metaller’s progression continued with the release of their debut album, Momentum, which was released worldwide in 2017 by Sliptrick Records. With buoyant praise from Metal Hammer, the band were awarded ‘Band of the Month’ by the highly respected magazine. The heavyweights were also featured on cover CDs of both Terrorizer Magazine and Metal Hammer. In 2019, BLEED AGAIN’s latest EP, Transition, arrived and it again increased their ever-growing profile with vigorous support from the underground, which was backed by notable streaming numbers. The band’s previous single, Survive, also secured much praise, as well as strong rotation on Kerrang! Radio.
BLEED AGAIN now embark on a new era complete with a solidified line-up. Armed with a hugely striking new album, Resurgence, the ascending quintet have thrown down a monolith marker with this record. The album is bursting at the seams with razor sharp riffery, anthemic refrains and brimming with energetic groove. With a slew of ear-bursting singles to follow, backed by alluring videos and live shows, there is no doubt that BLEED AGAIN will pick up new fans from across the land.