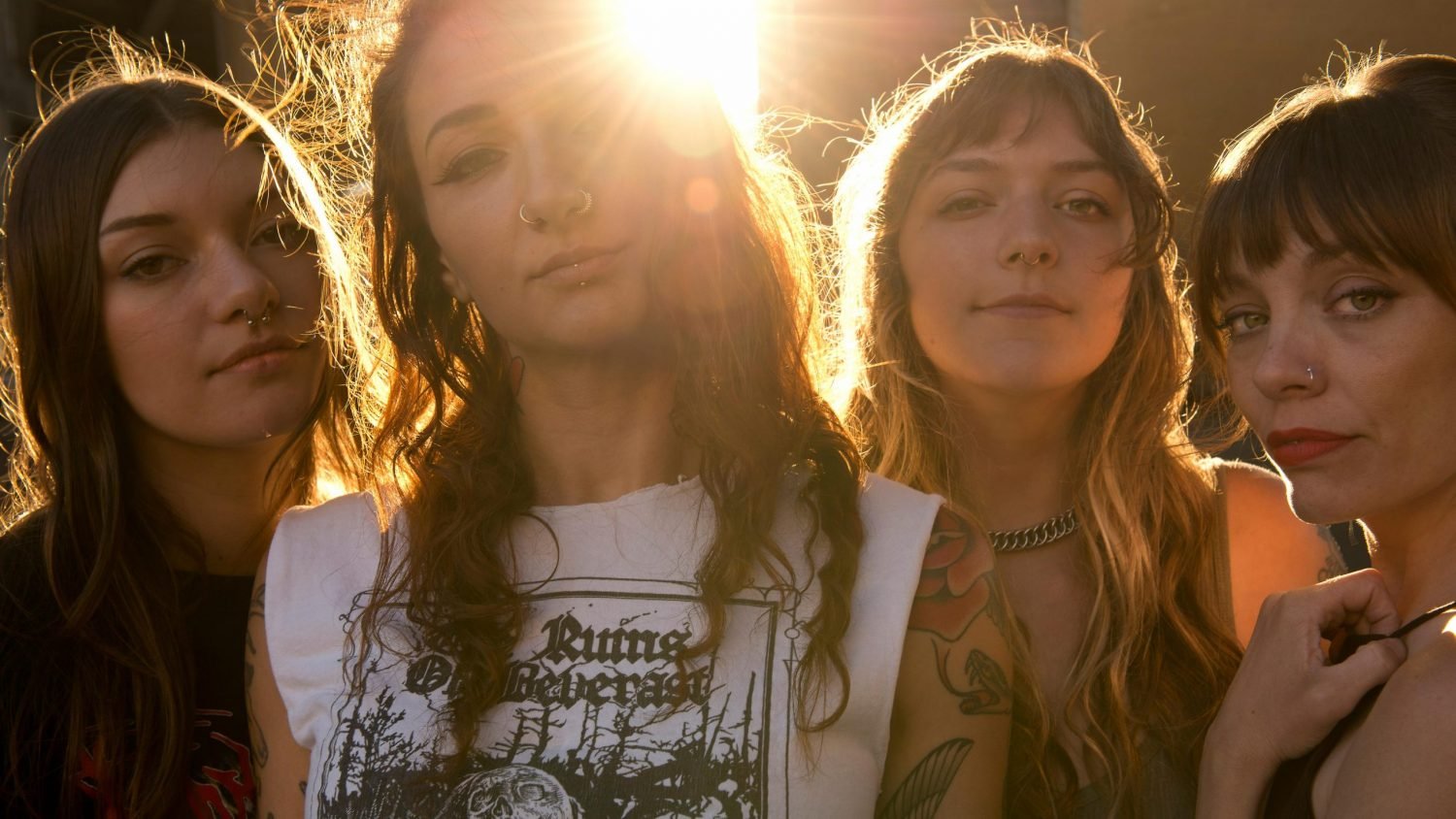 Empty surrounds all of me. It’s a poignant line from the third album by Blackwater Holylight that encapsulates the search for self when suddenly everything has changed. There’s a theme of processing vast personal trauma throughout Silence/Motion that eloquently — both lyrically and musically — and simultaneously embodies the crushing emptiness, sorrow, strength and rebuilding of recovering from personal devastation.
Pre-orders: https://www.ridingeasyrecs.com/product/blackwater-holylight-silence-motion/
“There was so much grief both in the world and interpersonally during the process of creating Silence/Motion,” says vocalist/bassist Allison “Sunny” Faris. “The four of us gave one another more space to be ourselves, to experiment with each other’s ideas and to be gentle with one another more than we ever have before.So, we knew this tenderness would manifest in extremely honest arrangements, and I think that you can hear that throughout the record.”
Curiously, considering the dark times in which it was created, this is the band’s most melodic and catchy music so far. Blackwater Holylight, as the name suggests, is all about contrasts: It’s a fluid convergence of sound that’s heavy, psychedelic, melodic, terrifying and beautiful all at once. And, Silence/Motion finds the band honing those contrasts, letting ideas and moods fully develop from song to song, rather than filling every song with a full range of their capabilities. It allows the band to go fully prog-rock here, and simply stay hushed and intimate there. There’s a new confidence to the band in how seamlessly they wield their stylistic amalgam.
“Writing this album was extraordinarily difficult emotionally, however it did come to fruition fairly quickly,” Faris says. “In the past, the theme of vulnerability has always been a big player and it definitely showed up full force while writing this album.”
Blackwater Holylight recorded the album as a four piece: Faris on vocals and guitar (on “Silence/Motion”, “MDIII”, “Around You” and “Every Corner”) and bass for the remainder, Sarah McKenna on synths, Mikayla Mayhew on guitar (and bass when Faris plays guitar) and drummer Eliese Dorsay. New second guitarist Erika Osterhout will perform the songs with them live. For Silence/Motion the band chose to work with a producer for the first time, bringing in A.L.N. (of Mizmor, Hell) to produce, along with recording engineer Dylan White — who also helmed their previous album Veils of Winter (2019) — at Odessa Recording Studio in Portland, OR. Guest vocals on album opener “Delusional” are by Bryan Funck (Thou.) Mike Paparo (Inter Arma) and A.LN. (Mizmor, Hell) lend guest vocals to album closer “Every Corner.”
Silence/Motion opens softly with interwoven folky single note guitars over an ominous sounding drone for the first minute, akin to moments from Pink Floyd’s Echoes. Suddenly an irresistibly head-nodding, groovy droptuned riff kicks in with the drums and it’s a full on blackened rocker with soaring synths and Funck’s witchy whispers over the top. “Who The Hell,” the track quoted above, takes proceedings into a Krautrock direction, centered around McKenna’s arpeggiated synth loop and Dorsay’s tom-tom triplets, while 16-note guitar strums add tension as Faris wearily sings, “So tell me who the hell would want to live this way — so afraid/ To feel this void, to dwell in it… I can’t describe this pain I wear/ It suffocates and you left it here.” It’s an incredibly powerful 6 minutes. The title track delivers the 1-2-3 punch of the album’s brilliant opening trilogy. It starts with lightly plucked acoustic guitar, plaintive piano chords and Faris’ voice gliding so softly it sounds more like a Mellotron. The song builds slowly toward crescendo, led by a swinging tom pattern, that abruptly switches back to a heavier version of the opening melody.“Silence/Motion” is about digesting and healing from sexual assault. As Faris explains, “It is an ode to the juxtaposition of feeling paralyzingly blank and and like your entire life is moving through you simultaneously.” Elsewhere, Black Metal guitars collide with dreamlike melodies. “Around You” brandishes a hopeful, hummable synth melody and shimmering shoegaze guitars like throwing down a gauntlet. In the end, it becomes undeniably clear just how completely into their own Blackwater Holylight has come.
“The analogy is that with our first record (Blackwater Holylight, 2018) we were getting into to the car and buckling up,” Faris says. “The second (Veils of Winter, 2019) we were turning the car on, and with this third we have kicked into drive toward our destination. Our destination is a bit mysterious and has the ability to change from day to day, but we’re on our way.”
Silence/Motion will be available on LP, CD and download on October 22nd, 2021 via RidingEasy Records.
BLACKWATER HOLYLIGHT LIVE 2021 – 2022
11.18 – Oberhausen (DE) – Kulttempel *
11.19 – Utrecht (NL) – DB’s *
11.20 – Nijmegen (NL) – Doornroosje *
11.21 – Antwerp (BE) – Zappa *
11.22 – Bristol (UK) – Exchange *
11.23 – Glasgow (UK) – Stereo *
11.24 – London (UK) – Underworld *
11.25 – Manchester (UK) – The Bread Shed *
11.26 – Dunkerque (FR) – 4 Ecluses *
11.27 – Paris (FR) – Petit Bain *
11.28 – Toulouse (FR) – Rex *
11.30 – Madrid (SP) – Caracol *
12.01 – Barcelona (SP) – Boveda *
12.02 – Annecy (FR) – Brise Glace *
12.03 – Aarau (CH) – Kiff *
12.04 – Vienna (AT) – Arena *
12.05 – Dresden (DE) – Chemiefabrik *
12.06 – Berlin (DE) – Zukunft am Ostkreuz *
12.07 – Hamburg (DE) – Bahnhof St. Pauli *
12.08 – Copenhagen (DK) – Stengade *
12.09 – Gothenburg (SE) – Pustervik *
12.10 – Stockholm (SE) – Debaser Strand *
12.11 – Malmö (SE) – Babel *
12.12 – Oslo (NO) – Youngs *
* w/ Monolord
01.21 – Dallas, TX – Trees #
01.22 – Austin, TX – Mohawk #
01.23 – San Antonio, TX – Paper Tiger #
01.24 – Phoenix, NV – Crescent Ballroom #
01.27 – San Diego, CA – Belly Up Tavern #
01.28 – Los Angeles, CA – The Regent Theater #
01.29 – San Francisco, CA – The Fillmore #
01.31 – Portland, OR – Wonder Ballroom #
02.01 – Vancouver, BC – Commodore Ballroom #
02.02 – Seattle, WA – The Showbox #
02.04 – Salt Lake City, UT – Kilby Court
02.05 – Denver, CO – Gothic Theater #
02.06 – Fort Collins, CO – Aggie Theater #
# w/ All Them Witches
Artist: Blackwater Holylight
Album: Silence/Motion
Record Label: RidingEasy Records
Release date: October 22, 2021
01. Delusional
02. Who The Hell?
03. Silence/Motion
04. Falling Faster
05. MDIII
06. Around You
07. Every Corner
LINKS:
https://www.blackwaterholylight.com
https://www.instagram.com/blackwaterholylight/
https://www.ridingeasyrecs.com