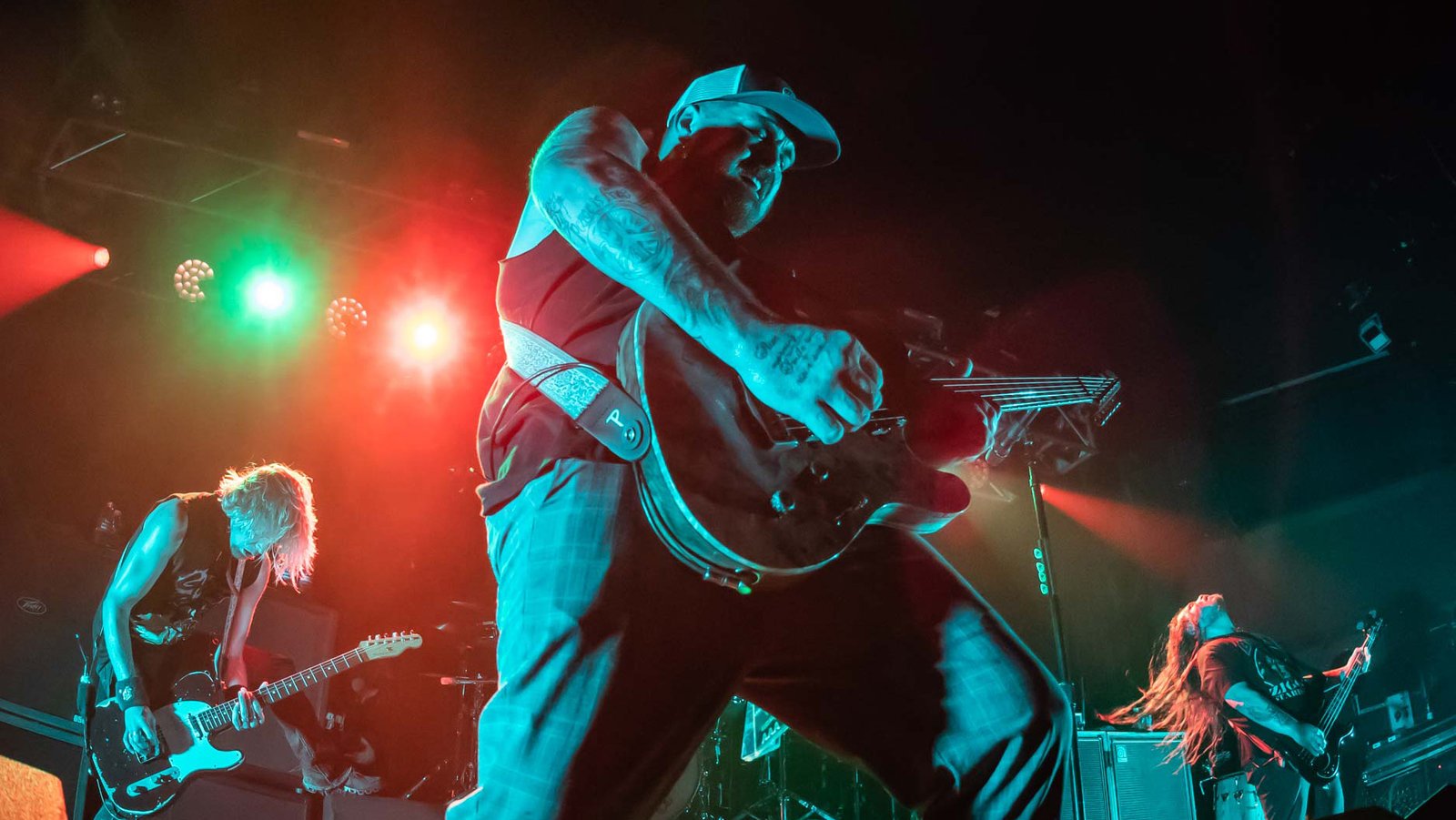 Thursday evening in early September after 18 months without live music for many people, I find myself in Bristol at the O2 Academy for the opening night of the Black Stone Cherry UK tour. These guys have bucked the trend and made the effort to travel from across the Atlantic during these unstable and unsettled times with this worldwide pandemic affecting absolutely all corners of this planet.
The queue started forming before 3pm and doors weren’t opening for a further four hours, so you could see instantly how excited the Cherry Heads (term for fans of the band), were for this wonderful opportunity to see their band after so long.
Supporting Black Stone Cherry on this tour is the wonderful Kris Barras Band who hail from the west of England. Originally seen as a blues artist, Kris has gone heavier in style for his new album with Josiah J Manning, formerly on keys, becoming the second guitarist and he compliments Kris perfectly, along with Kelpie on bass and Billy on drums.
Doors opened at 7pm and the crowd filed into the venue after first showing their covid passport. This was actually a lot quicker and easier than I expected so there wasn’t too much hanging about for people. The show was sold out and the venue saw 1600 people all waiting with so many emotions after so long and for a lot this was their first show since before the lockdown in early 2020.
The lights went down and the Kris Barras Band took to the stage around 7:45pm to great applause. Kris’s set was to last around 45 minutes which allowed him to really showcase his music and give the crowd a wonderful opening act. They start off with their latest single release ‘Dead Horses’, taken from their upcoming album, giving the crowd their heavier sound before playing a a few songs from his previous albums. Time for another new track with ‘Who Needs Enemies’ and ‘No Parade’ before a great cover of ‘Goin’ Down’ which turned into a fabulous jam. Another new track for the penultimate song before they end with a crowd favourite ‘Hail Mary’.
The Kris Barras Band had proved to be a very worthy opening act and I am more than sure that they would have won a few new fans from that performance and will continue to do so throughout the tour.
Time to clear the stage for the headline act Black Stone Cherry.
They walk out onto the stage at 9pm and the crowd erupt. It has been nearly two years since they last visited and the raw emotion could not be withstrained from either the sell out crowd or the band themselves. Throughout the set they kept referring to the long time away and how much they have missed these shores. Because of the covid risk etc, there would be no meet and greets on this tour or hanging out after shows, but people understand totally and are just extremely grateful to be able to see these guys live again.
They kick off a high octane set with a crowd favourite (as most of their tunes are to be honest), ‘Me And Mary Jane’, and have the crowd in full voice right from the off. This continues throughout their whole set. We are treated to songs from the studio albums from the self titled ‘Black Stone Cherry’, ‘Between The Devil & The Deep Blue Sea’, Folklore And Superstition’, ‘Family Tree’, and ‘The Human Condition’.
They started with a heavy bluesy number with ‘Mary Jane’, and continued with ‘Yeah Man’ then ‘Again’ where Chris’s voice is on display and is just sublime. This continues with ‘Burnin’ which again is just magical live. Every song has Ben Well’s leaping and jumping all over the stage. The man just does not stay still and is a total livewire. The new man Steve on bass fits in like a glove and fills a very big hole left when Jon left. The chemistry is obviously there as they all know each other very well.
We continue with songs that this crowd have missed hearing live for so long now and there is not a minute of the set wasted. At one point we are treated to a drum solo where the other guys leave the stage and the spotlight is well and truly on John as he has the watching audience totally transfixed as he displays his skill on the skins.
This was a momentous opening night, more so than most that have gone before fore one reason only, and that is Covid, and all that this has prevented from happening over the last 18 months or so. Everyone there tonight was so ready for this and it was a much needed boost in the arm for many that have been starved of their fix for too long.
Every single track was sung back to the band with vigour, word for word, and all the way through the guys were clearly lapping up the adulation and playing off of the buzz that they were getting from the audience.
This was a great show from start to finish and will live long in my memory.
These guys are a must see, and if not on this tour then the next one or the one after that, but just make sure you don’t miss out.
Review & Photography Will Carter