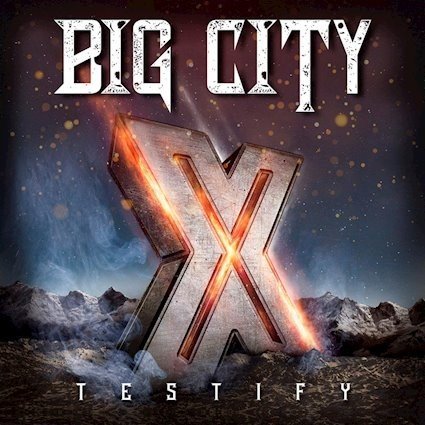 Frontiers Music Srl are very excited by their new signing, Big City,  in fact so excited that the Norwegian Melodic rockers have been offered a multi-album deal. The first of these is Testify X. If you are a fan of Firewind, Queensryche, Magnus Karlsson’s Free Fall, Europe or indeed Fair Warning then you are definitely going to enjoy this LP.

The band was originally put together by guitarist and songwriter Daniel Olaisen. His plan was to use a vast amount of song ideas and 80’s metal influenced guitar riffs that he had stockpiled over the years for a batch of songs with the right players. Frank Ørland, who also played with Daniel in Scariot (prog/thrash/heavy band featuring Communic and Spiral Architect members), was an obvious choice to bring to Big City as the second guitarist. Frank Nordeng Røe (Withem, Maraton, session drummer for Circus Maximus and Leprous) was brought in on drums after being discovered by Daniel via some internet research. The band was then completed with Jan Le Brandt on vocals and Geir Inge Olsen, who was brought in as a session bass player. However since the bands inception they have brought in a new singer in the form of Jørgen Bergersen from Rock the Night (Europe cover band) and the new demos caught the interest of Frontiers who moved swiftly to sign the band.

There is a punch and heaviness in his voice, says Daniel Olaisen and this can clearly be heard on the  first single from the Album .. Testify

This tune definitely shows of the  credentials of the band, however there is more to this LP than just straight ahead melodic rock anthems. Songs like `”Winds of The Road” give us insight into the technical, almost progressive composition, whilst still keeping the melody ( personal favourite of mine from the LP). We even get glimpses of power metal with “Heart like a Lion” and if you want melodic power metal then check out .. “Dark Rider” with its blistering twin guitar solo ..

Overall a great listen and one that will be returned to time and again.

Tracklist:
The Rush
Dark Rider
Testify
I Will Fall
Running Away
Conception
Winds Of The Road
Heart’s Like A Lion
Graveyard Love
How Dark Does It Get