Check out the videos:
Pills | Stop Stringing Me Along | Friday Nights Alright For Drinking 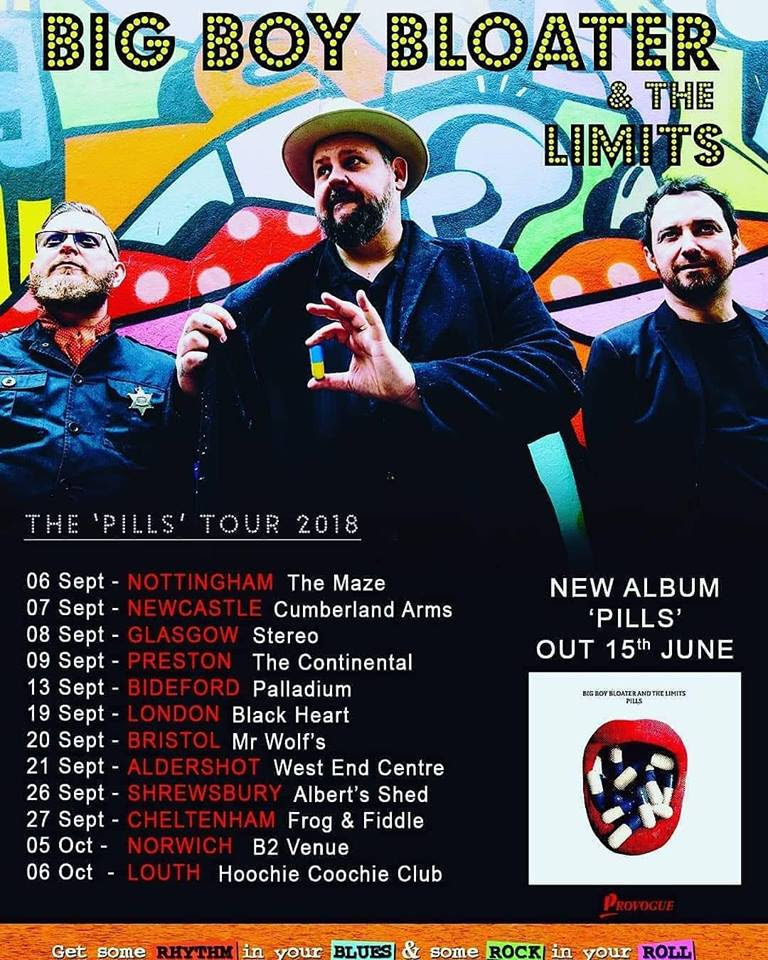 Following the release of their latest album ‘Pills’ in June,  Big Boy Bloater & The LiMiTs will be on the road from September to October touring the UK.

Following on from 2016’s Luxury Hobo, Surrey born Bloater re-focusses himself and Pills is a reflection of him having a clearer head. “I guess a lot of stuff happened on the Luxury Hobo tour. Maybe after the depression, my minds a bit more open and turned on to things, so I have observed more.”

Recorded in December 2017 with producer Adam Whalley, the band trimmed down to a power trio of Big Boy Bloater (Vocals/Guitar), Matt Cowley (Drums) and Steven Oates (Bass) for the new album and it kicks off with the rip-roaring title track Pills, an extension from the previous album and highlights the constant need for pills today but has a sinister edge.

The album continues with the autobiographical Friday Night’s Alright For Drinking and into the bleakly observant feet-moving Saturday Night Desperation Shuffle gliding seamlessly on to the gloriously poppy Stop Stringing Me Along which tells the tale of cigar-smoking scoundrels who promise the moon and to make you a million dollars, but ultimately, nothing happens. The angry undertones are masked by the candy coated exterior. “I’ll either write autobiographical or invent these characters, and because you can do so much more with them, anything’s possible.  You can make them as outrageous as you want, I like to blur the line between the two” he explains.

A lover of all things horror, especially Amicus and Hammer Horror, there are always nods towards the ominous or outlandish. If Luxury Hobo’s, It Came Outta the Swamp was B-Movie then Unnaturally Charming is more Hitchcock.  More sinister tales weave themselves into place on the beautifully juxtaposed Oops Sorry and the Tom Waits-esque Mouse Organ

She Didn’t Even Buy A Ticket follows a real incident. “It happened at a gig,” he remembers. “Someone actually gate-crashed looking for her husband, who was out on a date with another woman.” The story didn’t end there, at a later show he was talking to the audience about his new songs when, at the end of the night, two people came up to him and said, ‘that couple you talked about, that was us’. “Did I feel red faced that night” he laughs. In the finale, we find out about what happened to our friend the Swamp Monster from Luxury Hobo on the beautifully poignant Ukulele strummed album closer A Life Full of Debt. More than ever, the band effortlessly flit through styles and pace creating an album full of depth, emotion, humour, anger and sheer fun, all the time keeping the thread that makes Big Boy Bloater & The LiMiTs such a unique proposition. “I always used to like the Portmanteau horror films where they have 3 or 4 different stories in the film. So you’ve always got this constant change and you never really got bored of one story and then there this theme tying it all together.”

Over the last two years the band have toured the UK to packed shows, headlined Wychwood Festival, pulled in new fans at Camden Rocks Festival, supported Joanne Shaw Taylor, performed on the back of a pickup truck for a charity chili night, played with The Quireboys at a brewery and enjoyed “one of the most enjoyable” gigs they’ve ever done at Ramblin’ Man Fair in 2017.