BETHLEHEM CASUALS – are back with a surreal new video for ‘The Oke’; the latest offering from upcoming album: ‘The Tragedy Of Street Dog’ (out 17th April 2020).

Flicking to an all-new chapter in their ambitious concept album – a record that tells the story of a dog who wonders where all the music in Manchester has gone – this track introduces the listener to: ‘The Oke’.

“In a time when Manchester is silent, lacking all music for some unknown reason, there is still sound coming from one place… The Oke is the beast from Salford town who blisters and stings the ears of listeners with the raucous and terrible stories of his music. But Salford, is not Manchester, so our hero (Street Dog) still needs to find out the where the music in Manchester can be.”

Directed by Ashwin Menon, the video captures faceless ghouls and animal-headed beasts clashing in some of the darkest and most desolate corners of Manchester’s seedy underbelly. From its boozy classical beginnings, to its off-kilter synthesisers, thrumming tribal chanting & percussion, and its injections of smoky film-noir woodwind; the Casuals throw the kitchen sink at ‘The Oke’ to deliver another deliriously inventive single that defies categorization.

Around the release of new album ‘The Tragedy of Street Dog’ this April, the psychedelic jazz-pop septet have also announced a series of UK tour dates. The 14 date ‘Tragedy of Street Dog Tour’ will see them take their electrifying live show to some of the country’s finest gig haunts, with the full list of tour dates to be found as follows:

‘THE TRAGEDY OF STREET DOG’ TOUR

Tickets for all shows can be found here, and are on sale now:
https://www.songkick.com/artists/8702093-bethlehem-casuals/calendar

Released on 17th April 2020, ‘The Tragedy of Street Dog’ tells the story of a house-pet-gone-rogue. Set in the band’s own hometown, the story follows a canine protagonist ‘Street Dog’ as he embarks on a quest to rediscover the music of Manchester. Along his perilous journey, Street Dog visits some of the city’s infamous haunts like Temple Bar, The Oxford Road and The Hacienda, and encounters treacherous foes like ‘River Rat’ and ‘The Oke’.

Erudite and experimental, ‘The Tragedy Of Street Dog’​ sees Bethlehem Casuals’ sleazy, sultry and saxy brand of oddball pop truly come into its own. Mind-bending and musically adept in equal measure, it’s one heck of a ride and a record that casts a fresh and fantastical light on whether a dog’s life is all that bad after all… ‘The Tragedy of Street Dog’ was recorded at Giant Wafer Studios, Llanbadarn Fynydd in May 2019. All tracks on the album were engineered by Saam Jafarzadeh and Ashwin Menon, with mastering by Peter Fletcher. 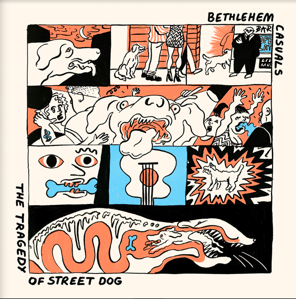 Bethlehem Casuals are a jazz/psych/rock septet based in Manchester. With an eclectic sound that infuses a world of influences, heady grooves and tribal drum circles, the Casuals’ have been dubbed by some as “urban rock styled DIY world music”; but it’s of course open to interpretation.

Gaining momentum with every one of their wonderfully weird releases, the Casuals recently caught the ear of BBC 6Music tastemaker Marc Riley who invited them in for a riotous live session and praised them as: “All over the place in the best kind of way.” With word getting out fast, this summer the group embarked on a Summer that was perhaps a little less relaxed than their namesake would usually allow. Invited to a slew of major festivals, the band hit up the stages of Bluedot to Kendal Calling, Moovin’ to Manchester Jazz, and were even invited to make their Glastonbury debut. They even found the time to host their own biannual shindig! ’Keep It Casual Fest’ to a sell-out capacity. In Autumn 2019, the Casuals put their festival-tested live chops to the test and left jaws hanging at a series of packed-out headline shows on their ‘Flaccid Passion’ Tour.

After a string of acclaimed singles and studio releases, the band will now release their upcoming album ‘The Tragedy of Street Dog’ in 2020. There are also plans to release an  illustrated children’s book to accompany the release. 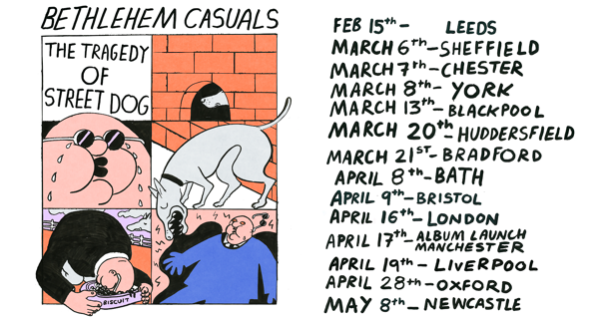