BEN BARNES
HIGHLY ANTICIPATED DEBUT EP
‘SONGS FOR YOU’
OUT NOW VIA LABEL LOGIC
“RISE UP” VIDEO OUT TODAY
“11:11” FEATURED AS “WHAT’S NEXT” ON ‘NOW THAT’S WHAT I CALL MUSIC! VOL. 80’
DUE OUT OCTOBER 29 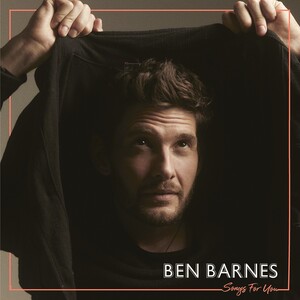 October 15, 2021 – is the day Shadow and Bone/The Chronicles of Narnia: Prince Caspian/The Punisher/Westworld actor BEN BARNES has been waiting 20 years for. His highly anticipated debut EP, Songs For You, is out now on all digital outlets via Label Logic, as distributed by Ingrooves.
Also out today is the stirring and emotional video for “Rise Up,” which was directed by Georgia King and features his The Punisher co-star Floriana Lima. The clip premiered on Deadline.com yesterday, and is now available on his new official YouTube page.
Last month, Barnes introduced his first song to the world with his soulful first single “11:11.” As People declared, “You may know Ben Barnes as Prince Caspian from The Chronicles of Narnia, or perhaps as General Kirigan in Netflix’s Shadow and Bone. But chances are, you don’t know him as a crooning piano man singing blue-eyed soul — at least, not yet. In that case, allow Barnes to reintroduce himself.” While The A.V. Club praised, “Working with producers John Alagia and Jesse Siebenberg, Barnes makes a confident debut with this buoyant ’70s throwback that’s brimming with strings and brass and soaring vocals.”
About the EP and the song from which the title is based, In Style proclaimed, “The song’s timeless intimacy calls to mind the kind of vulnerability Joni Mitchell talked about when she talked about writing her seminal Blue album, that she felt like ‘a cellophane wrapper on a pack of cigarettes,’ susceptible to being torn away. The vulnerability Barnes displays on Songs For You is similarly defenseless, an unhesitant ripping open.” And as Medium.com phrased quite poetically, “The five songs on Songs For You, his debut EP, prevent some events from becoming blurred memories of twenty years ago. Those who have played a role in them, now decorate rhythmic poems, emanate the warmth of a Sunday morning and collect stars at nightfall.”
About filming the video “Rise Up,” Barnes reveals, “I’ve known Georgia for 15 years from home. She showed me some of her shorts and other music videos, and I just loved her pitch for the story of building the sun out of old televisions and memories. That’s what she pictured listening to the song, and I responded to the abstract, determined tenderness of the concept. It felt how I did when writing the song. I hoped it might feel like the partner video to ‘11:11.’ It’s grungy and grimy, melancholy and emotional, but has a beautiful, hopeful, happy, peaceful ending–the polar opposite to the slick, stylish, upbeat tuxedo vibes of ‘11:11.’ Also, the wonderful Floriana Lima (my therapist in The Punisher), with whom I always acted so comfortably, intimately and easily opposite in the show, was a dream to have to bring the sunshine to the video.”
As Georgia King describes, “Ben leads with a courageous heart and you hear that in his music. I really wanted to capture the love, longing and hope in ‘Rise Up.’ By seeing Ben in a dark place create something full of light, by watching him build the sun out of beautiful memories, I strove to show all of the compassion, strength and vulnerability Ben so powerfully expresses in this song.”
About the EP title, Barnes shared, “Songs For You comes from one of my favorite records, ‘A Song For You’ by Leon Russell (but the Donny Hathaway version, of course), from wanting the songs to speak intimately to anyone who listens to them, and because if a song is written for you, you know who you are.”
For the “11:11” video, which was shot in a downtown Los Angeles theater, not only did Barnes join forces with Shadow and Bone director Lee Toland Krieger, he also reunited with Westworld co-star Evan Rachel Wood. The clip has quickly racked up hundreds of thousands of views since its release on September 17 on his new official YouTube page.
In other news, “11:11” is featured as one of the latest “NOW Presents What’s Next” New Music Preview bonus tracks on the new NOW That’s What I Call Music! Vol. 80 album, which will be released October 29. Fans can pre-order NOW 80 on digital outlets here.
Previewing tomorrow’s biggest hits, “NOW Presents What’s Next” has introduced major developing artists to NOW’s enthusiastic, highly engaged audience, including Billie Eilish, Walk The Moon, Hot Chelle Rae, Hunter Hayes, Capitol Cities, A Great Big World, George Ezra, and Shawn Mendes, among others. NOW 80 also features 16 major current hits from today’s hottest artists, including Billie Eilish (“Happier Than Ever”), Maroon 5 (“Lost”), Olivia Rodrigo (“good 4 U”), Imagine Dragons (“Wrecked”), Post Malone (“Motley Crew”), and many others.
After years of being directed, written for and edited in movies and television, this is his moment to shine the light on the five songs on Songs For You, lovingly crafted at his piano at home and presented unedited and straight from the heart.
With the ‘70s-style, rich, entirely organic instrumentation of all the tracks on Songs For You—produced by John Alagia (Paul Simon, Dave Matthews, John Mayer, Herbie Hancock) and Jesse Siebenberg (Ke$ha, Miranda Lambert, Neil Young, Kenny Loggins, Michael McDonald)— Barnes is baring his soul through his music for the first time; hopeful, joyful, passionate, nostalgic, vulnerable and loving. The lyrics to most of the songs, he explains, came from “poetry written for a loved one or just for myself, a long-forgotten phrase I jotted down in a notebook years ago, inspired by a photograph, a moment, a quotation, or in the case of one song, a story I read about a female pirate!”
The time is now… Barnes has waited long enough to share his true passion of singing and writing his own songs, and Songs For You is not only for him, but for his fans.
Facebook | Twitter | Instagram | YouTube