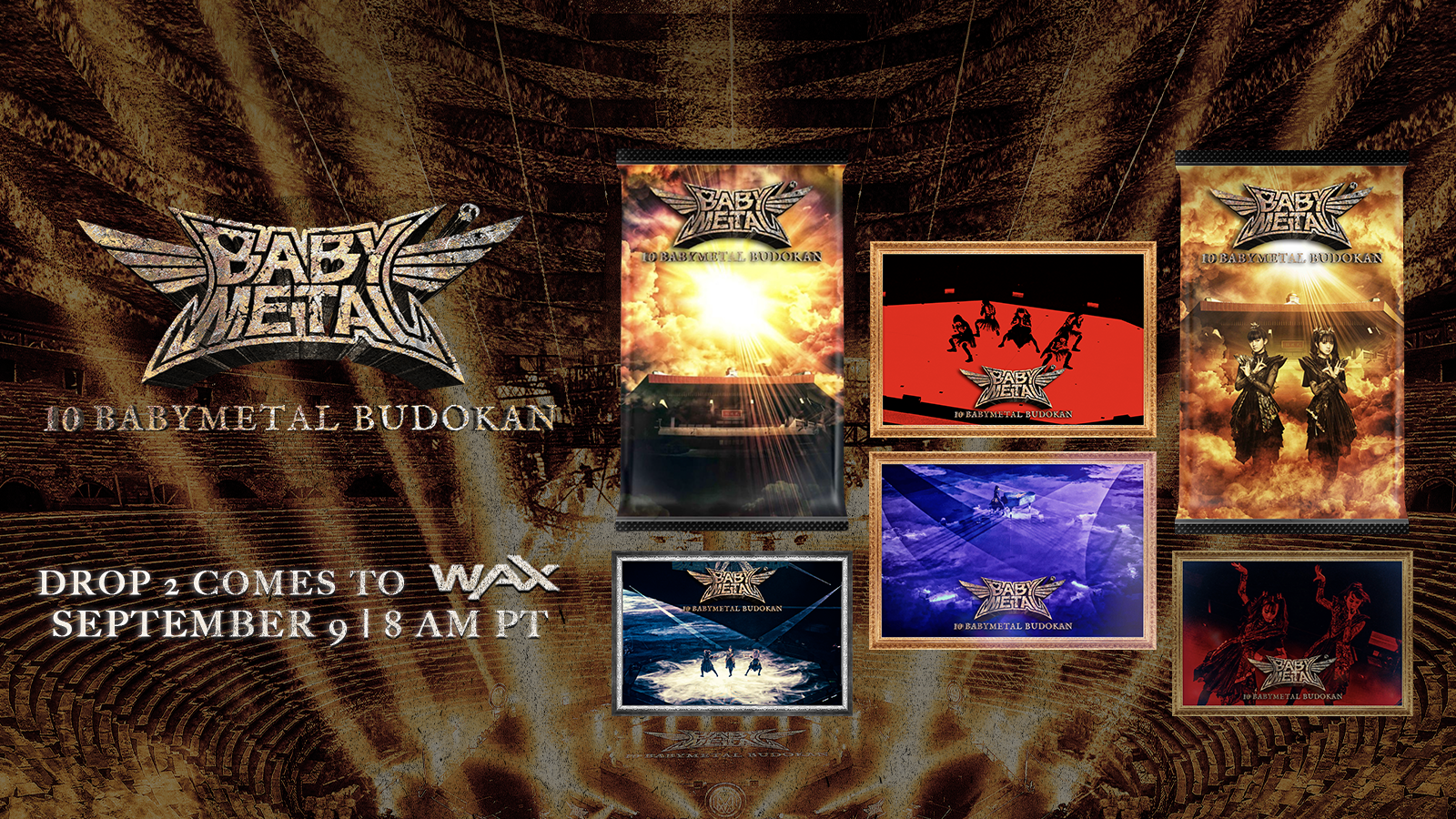 “BABYMETAL’s approach to NFTs is as innovative as its music, and our team celebrates the arrival of their divine inspiration on WAX,” commented Lee Jenkins, Production Manager at WAX.

There will be 24,200 “COMMON” cards minted over ten different designs, making up 88% of the total cards. An additional 2,750 “RARE” cards of eight different designs will make up 10% of the cards, with the remaining, 2% consisting of a split pair of 550 “SUPER RARE” cards.

Dropping on September 9th at 8:00am PDT/4:00pm GMT, the NFTs will be available in two packages at http://babymetal.cards. A digital only 5-card randomized pack set will be available for $35 and limited to 2,500 packs, with 1000 exclusive, limited edition MECHAPACK bundles including a 15-card pack plus the “10 BABYMETAL BUDOKAN” live album on exclusive Gold Vinyl available for $125. “10 BABYMETAL BUDOKAN” features the live audio of the final performance from BABYMETAL’s series of 10 performances at the Nippon Budokan which unfolded from January to April 2021. The live album contains a total of 13 songs that will allow you to relive the unforgettable experience at the Budokan.

As with the original “10 BABYMETAL YEARS” NFTs – which sold out in a matter of minutes – the “10 BABYMETAL BUDOKAN” digital trading cards will be issued as NFTs on the WAX blockchain. Transactions will happen via credit card or PayPal, but a WAX wallet will be required to purchase and receive the NFTs.

The pre-minted packs will be distributed on September 14 and can be opened starting at 10AM PDT/6pm BST by connecting your WAX wallet here.

Packs will be pre-minted and will be distributed based on order date and time.

The first person to order gets the #1 mint!

“10 BABYMETAL BUDOKAN” live album will be released digitally on September 29th 2021 via BABYMETAL RECORDS, with CD out October 15th and 2LP vinyl to follow in December.

BABYMETAL was formed in 2010. Their mission was to unify the world through Heavy Metal by creating a fusion of heavy metal and the Japanese pop genre. Their music contains a stunning mix of electronic pop, a pinch of alternative and industrial rock, and is leveled up by fast-driven heavy metal. Their live shows are ground-breaking and epic visual as well as sound performances. BABYMETAL continued to travel the path of Metal with the international release of their three albums, telling the story of the mighty FOX GOD and his brave metal warriors.

The Worldwide Asset eXchange™ (WAX), known as the King of NFTs, is the world’s leading entertainment NFT network. Cofounded in 2017 by William E. Quigley and Jonathan Yantis, WAX delivers the safest and most convenient way to create, buy, sell, and trade virtual items and physical products (NFTs and vIRLsTM) to anyone, anywhere in the world. WAX has facilitated the trade of more than 100 million digital items of collections including Blockchain Heroes, Topps GPK, Deadmau5 and Capcom’s Street Fighter.

The Worldwide Asset eXchange is certified carbon neutral. Not only has WAX solved the environmental issues presented by NFTs minted on Ethereum, but also has an environmental mindset and is taking action to erase their carbon footprint. Working as a Proof of Stake system, creating carbon offset NFTs, and partnering with Climate Care, WAX has made huge strides in building a sustainable future.