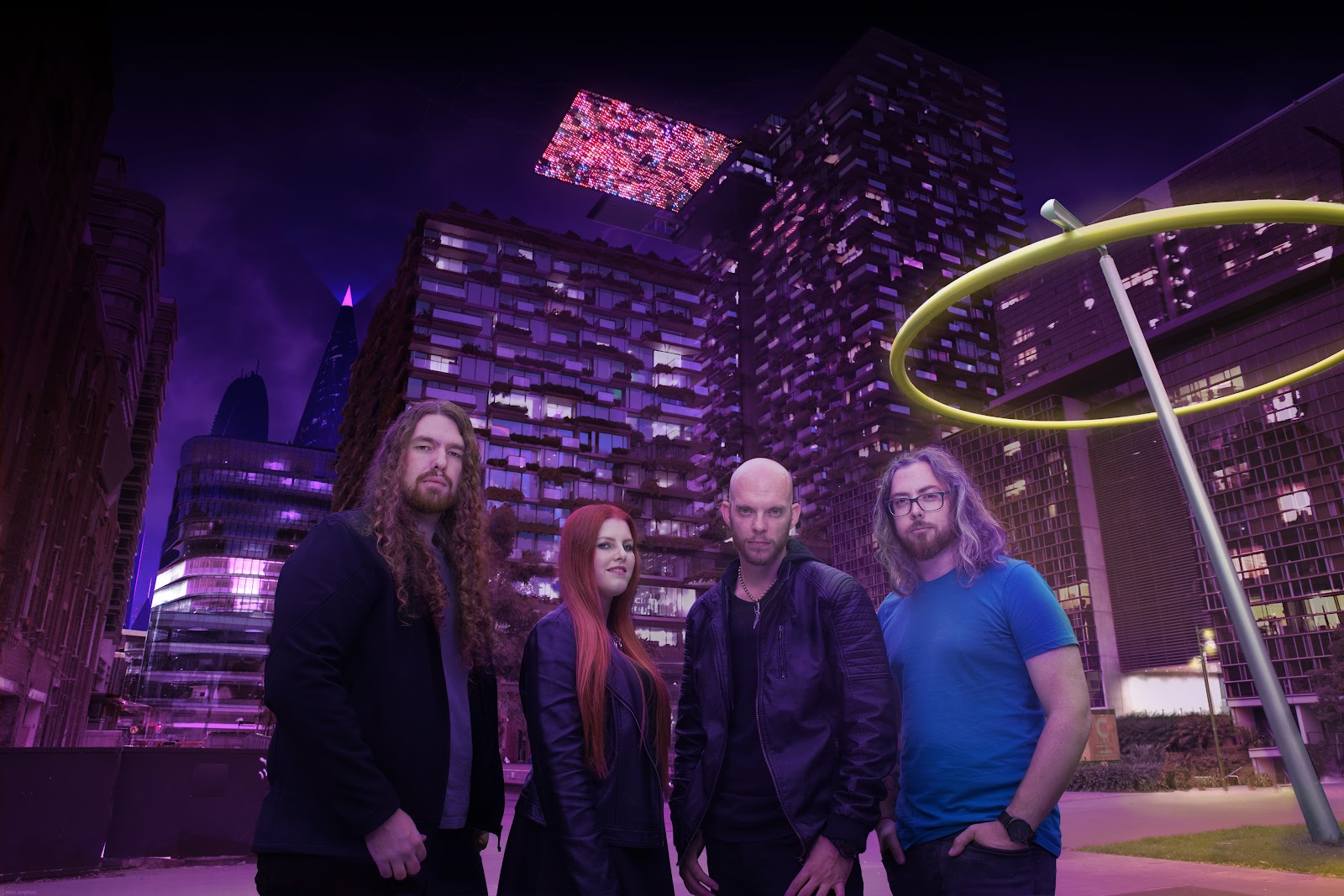 “Hemina should be a household name when it comes to discussing the Progressive Metal giants in the genre today.”
– 5/5, Metal Temple

“It is the complete package: an anomaly in the sometimes stale world of progressive metal.  Hemina know how to mix things around a bit and how to transition breathlessly from hefty portions to quiet pastoral musings.”
– 9.5/10 – The Prog Mind

“Australia is home base to many highly talented/innovative progressive groups, and you can surely add Hemina to that impressive list.”
– 4.5/5- Sea of Tranquility

“With each release, Hemina continue to top themselves in every way. Whether it is by incorporating new styles into their musical influences, improving their already stellar musicianship and songwriting, [or] creating classy, sophisticated, yet memorable melodies both musically and vocally.”
– 4.5 Star – Lady Obscure

Australian progressive metal quartet Hemina have released the first single from their upcoming fourth studio album ‘Night Echoes’, which will release in full on 9th August 2019. The single release of ‘We Will’ has been coupled with a gorgeous music video that perfectly encapsulates the band’s love of all things “retro” – a visual throwback back to the days of VHS recordings of the 1980s, shot in a style synonymous with the “home movie” trend that swept the globe during the same decade.

“As a child, I was raised in a family that was mega into Science Fiction films and TV. I think it left a lasting mark on me”, comments Hemina vocalist and guitarist Douglas Skene. “I was forever entranced by the near utopian societies of these stories that seemed to operate beyond the bounds of the stresses of life. In these films, humanity seemed on a bold and noble mission to improve as a species.”

Skene goes on to explain how this aspect of his childhood has inspired the band’s latest single; “Even in my adult years, I have always liked this idea, and it’s always in the back of my mind. Lyrically, I wanted to capture some of my fascination with this voyage for self-improvement in ‘We Will’. Musically, this single extends on one our main goals in Hemina; to create colourful musical pictures with harmony using many voices and rich extended chords and modalities. The video captures this as well, in its own way, with an interesting colour palette that you don’t really see these days in modern music videos”

Described by Hemina as the “stadium metal track” within their upcoming album, ‘We Will’ bites with sing-along vocals, soaring melodies and powerful double bass pedalling. In tandem with the band’s own personal inspirations for the single, ‘We Will’ doubles up as an uplifting and inspirational slice of bite-sized prog metal, booming with a rallying call to action during what the band describes as “confusing and dark times”.

The release of “We Will” marks the first taste Hemina’s upcoming fourth studio album ‘Night Echoes’ – which also stands as the fourth instalment in an extensive, inter-connected concept arc that has unravelled across the band’s previous studio albums. Synthetic (2011), Nebulae (2014) and Venus (2016) each tell a story in their own right, yet culminate into a much larger and more expansive tale of love, loss and deep emotional struggle.

The central character portrayed in the concept of ‘Synthetic’ was a boy who grew up in an insular conservative family, without the freedoms and expanses of childhood. A boy whose life was sparked as a result of criminal rape, this became a fact that he was never allowed to forget. Through equal parts religious indoctrination, dissolution of the family home, and the delusions of grandeur that follow, he took his own life only a short number of years after settling down with a wife and son; his attempt to build the family unit he never had.

‘Nebulae’ and ‘Venus’ told a different story of a woman whose romantic indiscretions left her a prisoner in her own apartment block, at the hands of her distrusting husband – a domestic violence perpetrator. It speaks of her dreams and the years she remained a prisoner to her partner, and her own psyche. Of all the things she wished for herself, it was new beginnings that she wished longed for. A chance to build something bold and real. A noble future for herself and perhaps a family to come. While previously ambiguous, it is with clear certainty that the woman from the ‘Venus’ and ‘Nebulae’ arcs is in fact the wife of the central character from ‘Synthetic’.

In keeping with its’ predecessors, ‘Night Echoes’ will build upon Hemina’s existing web of stories, shedding new light on a character previously introduced in one of the band’s past albums and crafting an all-new story to add to their on-going tale. Quite how their latest single “We Will” fits into the larger narrative of their upcoming album remains a mystery for now, but more details are promised in the near future!

You can purchase and stream Hemina’s previous studio albums via iTunes and Spotify. ‘Night Echoes’ will be available to purchase from 9th August 2019.

Hemina are a 4 piece Progressive Metal band from Sydney, Australia. The band’s sound has been described as a unique combination of hard hitting syncopated grooves, lush synth backwashes, multi-part vocal harmonies, blistering memorable leads with a focus on songwriting and emotion.

The band have supported international bands Uriah Heep, Kamelot, Apocalyptica, Queensryche and are opening for Haken on the Sydney leg of their Vector world tour. They have shared the stage with Aussie legends Caligula’s Horse, Chaos Divine, Voyager, Twelve Foot Ninja, Divine Ascension, Breaking Orbit among many others and simply live for the stage.

Hemina’s first three albums ‘Synthetic’, ‘Nebulae’ and ‘Venus’ were met with critical acclaim traversing many different sides of the band’s sonic spectrum from the complex and dark, to the immediate and uplifting. The release of ‘Venus’ saw Hemina taking their music overseas culminating in performances at Progpower Europe (Netherlands) and Euroblast (Germany).

The band’s fourth album ‘Night Echoes’ is their most collaborative work to date, offering the eclectic flavours of what fans have come to expect in the past as well as a new palette and range of emotional expression never before heard from the group. ‘Night Echoes’ is Hemina at their most emotional and melodic without ignoring the aggressive and venomous side that keeps the music in balance. With a powerful modern production and mix crafted by Skene at Ploughman Studios with audiophile mastering from Ermin Hamidovic at Systematic Productions (Periphery, Devin Townsend, Plini, Architects) – their upcoming studio album shows Hemina at their best yet.