Beloved So Cal punks Audio Karate are making the most of their recent reunion. In addition to upcoming shows with Descendents and an appearance at The Fest next month, the band has unearthed songs from a “lost” recording session that they did after the release of 2004’s Lady Melody, which will finally see the light of day when it’s released as a 7″ EP this Friday, September 28 via Wiretap Records.

The EP marks the first “new” music from Audio Karate in 14 years, making it essential listening for fans of the LA 4-piece.

Listen to one of the tracks “Bounce” here: https://youtu.be/nQFlyFJr7To.

Check out a video of the band discussing the “lost” album here: https://youtu.be/QbG0esdNCzM. 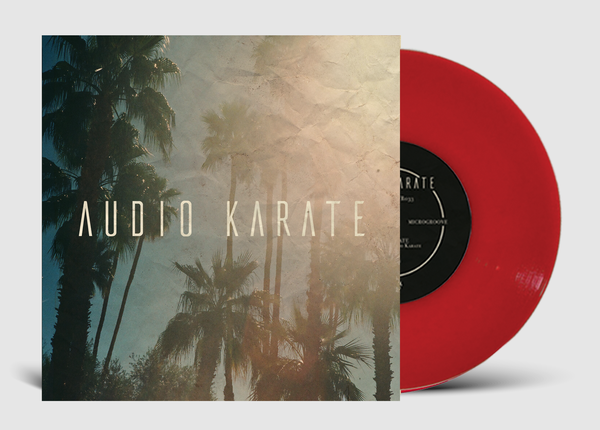 By the end of 2006, Audio Karate was no longer on Kung Fu Records and had stopped playing shows. Jason decided to build a studio in a garage in Montebello, CA. He, Justo and a family friend constructed the room within a room, ran the electrical, sanded the drywall, and painted it themselves. They called it Lady Melody Studio.

Audio Karate called it quits in 2007. Jason dismantled the studio and put his MacBook with all of the song files away to collect dust. Until now.

This 7” is a time capsule. It’s the first single from their forthcoming album, Malo, the unreleased, nearly lost follow-up to their second album, Lady Melody (2004).

“Bounce” is a freight train jam that picks up where “Jesus Is Alive & Well” left off. It features Art delivering his finest punk rock James Brown vocals and Jason and Justo in their prime.

In “Landing,” Art ditches his vocal-bleeding growls for falsettos. It’s a layered, anthemic track unlike anything AK has ever done.

The AK crew is happy to finally share this music with you. We hope you enjoy it as much as the guys enjoyed making it more than a decade ago.

They still can’t believe it happened. Sure, it had the echoes of a common tale, but it wasn’t one. A passion for punk rock and a whole lot of luck propelled four Mexican-American kids from SoCal backyards to international tours, sharing stages with acts like The Ataris, The Vandals, Face to Face, NOFX, Social Distortion, Thursday and Thrice.

It’s been more than a decade since Audio Karate has played together. They are no longer kids. They have full-time jobs and two members have kids of their own, but when Wiretap Records approached them with an opportunity to release their debut record, Space Camp, on vinyl for the first time, they couldn’t say no.

Audio Karate is Arturo Barrios (vocals/guitar), Jason Camacho (guitar), Justo Gonzales (bass) and Gabriel Camacho (drums). They formed in the mid-90s under the name “The Goonz” and changed their name upon signing to Kung Fu Records in 2001. Kung Fu founder and Vandals bassist Joe Escalante took the band under his wing after hearing a tape demo that Art handed Kris Roe (The Ataris) at a show.

In May 2002, they released Space Camp (produced by Trever Keith of Face to Face)—a sunny pop-punk record bursting with adolescent sentiment and bright riffs. The band toured heavily, and the album’s single, “Nintendo ’89,” made its way onto MTV and Fuse. In 2004, they played a leg of the Vans Warped Tour and released their follow-up record, Lady Melody (produced by Bill Stevenson of Descendents/All). Lady Melody was a striking, dark departure from Space Camp—packing growling vocals, layered melodies and catchy hooks into songs like “Jesus is Alive and Well (And Living Mexico),” “Hey Maria” and “Gypsyqueen.” The record straddled pop-punk convention and technical oddity, with unique key changes and riffs that seemed to sound “wrong” while sounding gloriously right. Even Stevenson wondered how they did it, marveling at times during their recording sessions: “Technically, this shouldn’t work.”

Following headline tours for Lady Melody, the band went on hiatus in 2006, influencing a decade of pop-punk in their wake and garnering fans from some of the biggest bands in the genre.