UK CO-HEADLINING WINTER TOUR
WITH LIONHEART
+
New Single
‘Eyes Like Ice’
Italian rock powerhouse label Frontiers Music srl have announced the re-signing of Airrace for a new
album to be released in 2018. An opening salvo from the record arrives today (11th September) with a
single entitled ‘Eyes Like Ice’, a lyric video for which is also available.
One of the UK’s pioneering AOR bands, the group will play the Rockingham 2017 event in Nottingham
on 22nd October, before hitting the road with kindred spirits Lionheart for a pre-Xmas co-headlining tour.
Dates are :
22.10.17  NOTTINGHAM Rockingham 2017
30.11.17  CARDIFF Fuel *
01.12.17  WOLVERHAMPTON Slade Rooms *
02.12.17  LONDON Underworld *
03.12.17  SHEFFIELD O2 Academy *
05.12.17  NEWCASTLE The Cluny *
06.12.17  EDINBURGH Bannermans *
*co-headlining with Lionheart
Airrace founder and guitarist Laurie Mansworth says :
“We are absolutely delighted that Airrace have signed to Frontiers. Our new single has the classic
Airrace sound but with a heavier edge. We can’t wait for you to hear the full album. I’m also thrilled to be
taking the band on the road, which will be the first time the new line-up has toured together. It features
my son Dhani (of The Treatment) on drums.”
Of the tour co-headliners, he adds :
“I toured with Dennis, Rocky and Steve back in the 80’s and have very fond memories of our time on the
road together. It’s a great double bill and I really hope rock fans up and down the UK will come and
share a fun night with us.”
Known in Hard Rock circles for being the band that saw the musical debut of drummer Jason Bonham,
Airrace was the brainchild of former More guitarist Laurie Mansworth. Following the acclaimed 1984
release of their debut album, ’Shaft Of Light’, the band supported rock titans such as Queen, AC/DC and
Meat Loaf, but they had crash-landed by the summer of 1985. It took a 25th anniversary reissue of the
record to reunite the group (with a slightly amended line-up), and they eventually issued a second
album, ‘Back To The Start’, via Frontiers in 2011. 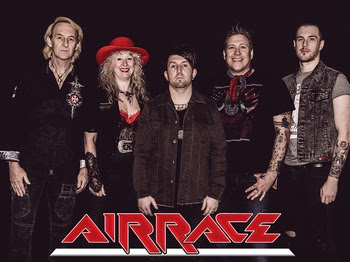