After a six year wait, the Los Angeles Death Metallers have returned. Following up the massive 2014 release Obsolescence, now comes a four track EP that nearly didn’t happen. Having nearly called it a day, the members took some time and then when things became fun again, it was time to see where it would lead.

This release isn’t exactly a continuation of Obsolescence but more of an evolution of a band that needed to find what they enjoyed creating together. The result is something both crushingly heavy and melodically stunning.

The opening track ‘A Nightmare Slain’ has a slashing riff with technical brilliance before a gravelly vocal growls over the blistering instrumentals. The huge slab of classic Death Metal opener displays why this band are needed and the way that it keeps slapping you in the face is the sign of quality Death.

As ‘Blacken The Sky’ picks up where ‘A Nightmare Slain’ let’s off, the guitars are continually attacking on every fret and then some, as the drums pummel and batter and then that vocal is like sandpaper on your eye balls.

‘Behind Space’ is the final brutal assault of the four tracks and if you hadn’t guessed already, is blisteringly stunning Death Metal.

’Bewitched’ takes a steadier, more Doom-laden turn as the vocal turns cleaner but takes nothing away from the feeling of dread that the best Doom forces on you. That impending feeling of something horrendous in the pit of your stomach stays for the rest of this track and rounds off the EP in a surprising yet incredible way.

This EP is a fantastic addition to any selection of Death Metal. The combination of quality instrumentals and top drawer vocals delivers what is a brilliant EP. Yes there may only be four tracks, but those four tracks pack more heft than most other things that have been released. The doom addition shows that the band are happy to go where the inspiration leads them and to be honest, id just let them do their thing as where it has led to is very impressive.

Lets hope that the wait for the next release isn’t as long, bug keys also celebrate that the band are still a band and have come back together and created something to be experienced.

Nightmare Frontier will be released February 4th 2022 via Season of Mist.

ABYSMAL DAWN will be releasing ‘Nightmare Frontier’ on February 4, 2022, but the Los Angeles death metal titans are already streaming the EP in full via the official Season of Mist YouTube channel You HERE! The link may be freely spread throughout your channels.
ABYSMAL DAWN frontman/founding member Charles Elliott comments: “Our new EP is a available to check out now! It includes a Bloodborne inspired track, a re-recorded song from our first album, an In Flames cover and a Candlemass cover with some unexpected clean vocals. It was fun to explore and pay tribute to some of our more melodic influences on this one. Enjoy!“

Pre-orders for ‘Nightmare Frontier’ are still available HERE. The full EP can be pre-saved across all streaming services HERE. 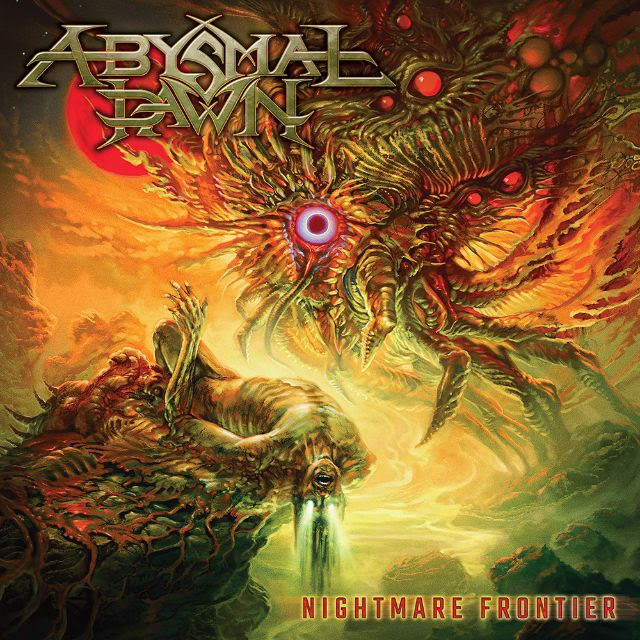 “There was a brief period after doing two months of touring back-to-back in the U.S. and Europe in 2015 that I almost felt like calling it quits,” Abysmal Dawn’s Charles Elliott says. “It was our first time in Europe and I just had a hard time enjoying it. The band had grown, and I was a bit tired of having to handle most of the managerial aspects of what we do. The joy had been ripped from things and people weren’t getting along, and some people acted like they didn’t want to be there. But we went our separate ways with some of the members and all of a sudden, the band was fun again. They went on to other things and we’re probably all happier in the end. Sometimes, I feel it’s a miracle this album or band even still exists. I’ve avoided swearing on our records in the past, but the album’s opening line is actually, ‘Fuck you all!’ Maybe it’s primitive by our past lyrical standards but it’s genuine and it’s the most heartfelt, ‘Fuck you, we’re still here’ I could put on a record. I’m glad we stuck it out because I think this is our proudest moment so far.”

To say Phylogenesis is an extension or continuation of Obsolescence isn’t exactly as straightforward as it should be. On one hand, all the Abysmal Dawn trademarks—technicality, brutality, and melody—remain ingrained in the songwriting fabric. On the other, the band’s fifth full-length is more cohesive, rhythmically sophisticated, and far more adventurous. Elliott calls it “a major evolution.” Certainly, the six years of constant refinement, edge smoothing, and transition adjustments have paid off. What started as jam sessions between Elliott, bassist Eliseo Garcia, and drummer James Coppolino in 2016 eventually turned into one-offs. That there was no time limit to put Phylogenesis together ended up both a blessing and a curse. Total creative freedom at very little expense is a dream scenario, something a band of Abysmal Dawn’s stature took advantage of for their magnum opus. But without a ticking clock and dollars burning, the pressure to focus was far less severe, resulting in delays and feature creep.

“It was basically James, Eliseo and me meeting up at my place, jamming on ideas, seeing what worked and tweaking them from there,” says Elliott. “With the exception of ‘Hedonistic,’ James wrote all his drum parts. Obsolescence was demoed with me programming all the drums since our drummer at the time had moved up north. It was what it was, but it was pretty frustrating at the time. Having someone to bounce ideas off of in real-time, helped in maintaining the joy and momentum of making this album. Once it was time to record bass and leads, Eliseo and Vito [Petroni; guitars] would trickle in when they had ideas. We had no real deadline and seemingly infinite time to do things. Admittedly, I think it was hard for me to focus on the lyrics, not only because of things in my personal life but because I was focused on getting the guys in to complete their parts so I could focus.”

Finish Phylogenesis they did, in fact. Under significant duress, Abysmal Dawn had overcome their roadblocks. The results of the group’s undulating professional and personal schedules aren’t to be trifled with, however. Opening track “Mundane Existence” is a firestorm of labyrinthine yet savage riffs, enraged vocals, and machine-gun drumming. It’s death metal personified, enlightened, and perfected. Elsewhere, tracks such as “The Path of the Totalitarian,” “A Speck in the Fabric of Eternity,” and “Soul-Sick Nation” (feat. Fredrik Folkare of Unleashed, Firespawn, et al.) pose real threats to the status quo. In all three, Elliott’s passion for and dominance of death metal’s tenets are tangible. But there’s more to Abysmal Dawn on Phylogenesis than customary ritual. From the ruthless groove of “Hedonistic” and the staccato stabs of “Coerced Evolution” to the late album gem “The Lament Configuration” and the blistering cover of Death classic “Flattening of Emotion,” the songs are designed to slay in ways we’re just beginning to understand.

“We’re a pretty brutal death metal band, but what I feel like sets us apart is that no matter what we do there’s always some underlying sense of melody and hooks,” Elliott says. “There are lots of bands that are ridiculously brutal. There are lots of bands that are over-the-top technically or are blatantly melodic. We combine all that but we try to write something that sticks with you over time; that you’ll keep coming back to, and that works well in the live environment. We love all types of music, whether it’s fusion or industrial music, and it shines through here and there. But in the end, though, we’re a pure death metal band at heart trying to retain that old-school feel with an updated take for a new generation.”

Conceptually, Phylogenesis deals with the breakdown of social constructs humans have built over time. The album title is defined by the evolution of (or diversification) a species. So, Phylogenesis is an ironic take on Elliott’s observations, particularly how social media has accelerated and exacerbated the de-evolution of humanity’s interactive abilities. The cover art, again by Swedish artist Pär Olofsson, isn’t directly correlated to the lyrical narrative, but it does continue where Obsolescence left off. The Olofsson cover art has envisioned what it’s like on the inside of the Obsolescence tower, and that it’s humans that are being fed back to humans. The cover art continuity is akin to Richard Fleischer’s famed Soylent Green film but ripped through Elliott’s demented death metal lens.

“I think the lyrics deal a lot with things we encounter in our modern society and the effect it has on the individual,” says Elliott. “The dehumanization effect and divisiveness caused by bickering on social media (‘The Path of the Totalitarian’), the decay of legitimate journalism (‘True to the Blind’), struggling to find purpose in the pursuit of happiness (‘Hedonistic’), wishing something was greater than yourself (‘Mundane Existence’), the mental illness epidemic (‘Soul-Sick Nation’), embracing pain over numbness to feel alive (‘The Lament Configuration’), having our consciousnesses uploaded to a grid in order to make life sustainable on Earth (‘Coerced Evolution’), and the common theme throughout the band of wishing life on Earth would just start over (‘A Speck in the Fabric of Eternity’). I had started off wanting it to be a concept record but later scrapped that idea because I didn’t like how it was going. In the end though, it just naturally all tied together in some way. Even the Death cover seemed to fit lyrically in hindsight. ‘Coerced Evolution’ is really the only song that in the sci-fi vein this time around. As for Pär, yes, he did the cover art once again. We love working with him and we’ve been creating great covers with him since 2006.”

Abysmal Dawn recorded Phylogenesis over a multi-year timeframe. In fact, Coppolino’s drums were tracked as far back as 2017 with long-time collaborator John Haddad at Trench Studios. The rhythm guitars and vocals, as produced by Mike Bear and Elliott, were also done at Tastemaker Audio the same year. So, some of Phylogenesis goes back, but the parts are no less lethal. Slowly but surely, the group’s newest and greatest materialized, with Elliott finishing the lead guitars, bass, additional vocals, re-amping, and mixing sessions in 2019, again at Tastemaker Audio. Abysmal Dawn then packaged up their fifth for mastering ace Tony Lindgren (Rotting Christ) to handle at Fascination Street Studios in Sweden. Contemporary yet absolutely remorseless, Abysmal Dawn’s Phylogenesis is death metal for a new age.

“We took our time and went to few studios this time around, so it’s a bit of a laundry list,” Elliott says. “John Haddad engineered the drums at Trench Studios. John has been involved with all our records in some form since From Ashes. Mike Bear helped track and produce the vast majority of my vocals and rhythm guitars out of my studio. Mike produced both Leveling the Plane of Existence (2010) and Obsolescence. I tracked and produced all the leads, bass parts, and other odds and ends and mixed the album as well. Tony Lindgren at Fascination Street Studios mastered the record in the end.”

As for Abysmal Dawn’s next steps, the quartet await the release of Phylogenesis. With past support coming from the Village Voice, Decibel, PopMatters, and Pandora, as well as the group’s rabidly-devoted fanbase, the future of death metal is in good hands.

Guest Musicians: Orchestral arrangement on “Behind Space” by Craig Peters (Destroying the Devoid, Deeds of Flesh)