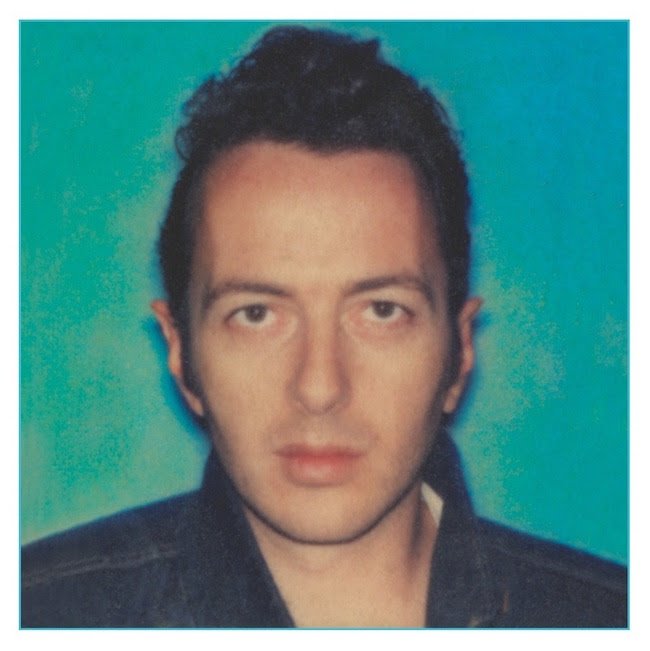 Photo by Joe Strummer Estate
On Joe Strummer’s birthday, Friday 21st August at 8:00 PM UK time, the music and arts community is coming together for a global event to celebrate Joe Strummer’s legacy as a solo musician and singer of The Clash.
Produced by Jesse Malin, Jeff Raspe and Joe Strummer estate manager, David Zonshine, A Song for Joe: Celebrating the Life of Joe Strummer will be a two-hour event that will stream for free at JoeStrummer.com, with all donations benefiting Save Our Stages.
The night will be hosted by Jesse Malin and will feature never before seen live footage of Strummer, alongside special performances and testimonials by many of the former Clash front man’s friends and peers.
“To see so many musicians and artists come forward to honour Joe is really touching,” says Joe’s wife Lucinda Tait. “Community was always important to him. Whether it was playing music with friends, organising all night campfires, or hijacking festivals, Joe was always focused on bringing people together. Even though we can’t all be in the same room together, I cannot think of a better way for us all to feel united. Joe would have loved this.”
“This tribute to Joe is not only a great way to honour him, but to also remind people how important his message is right now,” adds Malin. 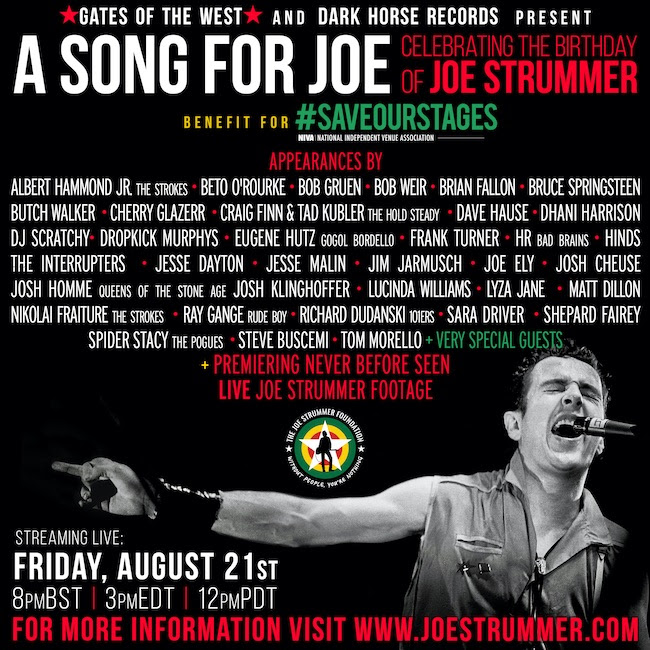 A Song for Joe:  Celebrating the Life of Joe Strummer
Joe Strummer (never before seen live footage)
Albert Hammond Jr.
Beto O’Rourke
Bob Gruen
Bob Weir
Brian Fallon
Bruce Springsteen
Butch Walker
Cherry Glazerr
Craig Finn & Tad Kubler (The Hold Steady)
Dave Hause
Dhani Harrison
DJ Scratchy
Dropkick Murphys
Eugene Lutz (Gogol Bordello)
Frank Turner
HR (Bad Brains)
Hinds
The Interrupters
Jesse Dayton
Jesse Malin
Jim Jarmusch
Joe Ely
Josh Cheuse
Josh Homme
Lucinda Williams
Lyza Jane
Matt Dillon
Nikolai Fraiture
Ray Gange (Rude Boy)
Richard Dudanski (101ers)
Sara Driver
Shepard Fairey
Spider Stacy (The Pogues)
Steve Buscemi
Tom Morello
+ very special guests
Joe Strummer
Punk poet, musician, composer, actor and style icon, Joe Strummer spent his life smashing musical and cultural boundaries both as the singer of The Clash and as a solo artist. Songs like ‘Know Your Rights’, ‘London Calling’, ‘Rock The Casbah’, ‘Straight To Hell’, and ‘Coma Girl’ engulfed the global masses and sound as urgent and vital today as when they were written.
It was Strummer’s politically charged lyrics that helped bring punk to the masses. Calling out social injustices and giving a voice to the struggles of the working class, his lyrics struck a chord with legions of fans and the press alike, with Rolling Stone calling The Clash “the greatest rock & roll band in the world”.
He once famously said, “People can change anything they want to, and that means everything in the world.” And through his art, Strummer played his part in shaping the musical landscape of the world and with it left an unrivalled and timeless legacy.
Save Our Stages
The mission of the National Independent Venue Association (NIVA) is to preserve and nurture the ecosystem of independent live music venues and promoters throughout the United States. NIVA is making a final push to Congress to pass the Save Our Stages Act and the Restart Act in order to keep independent venues nationwide from closing permanently. Take action here.
Gates of the West
Jesse Malin & Jeff Raspe created Love It To Life and the Gates Of The West shows to bring together some of the best musicians and celebrate the music of Joe Strummer and The Clash. Every show is a benefit for The Joe Strummer Foundation, Music & Memory and other charities. The six sold-out shows to date, have featured many special guests performing songs written and performed by Strummer and The Clash.
www.joestrummer.com
www.instagram.com/joestrummerofficial
www.facebook.com/JoeStrummerOfficial