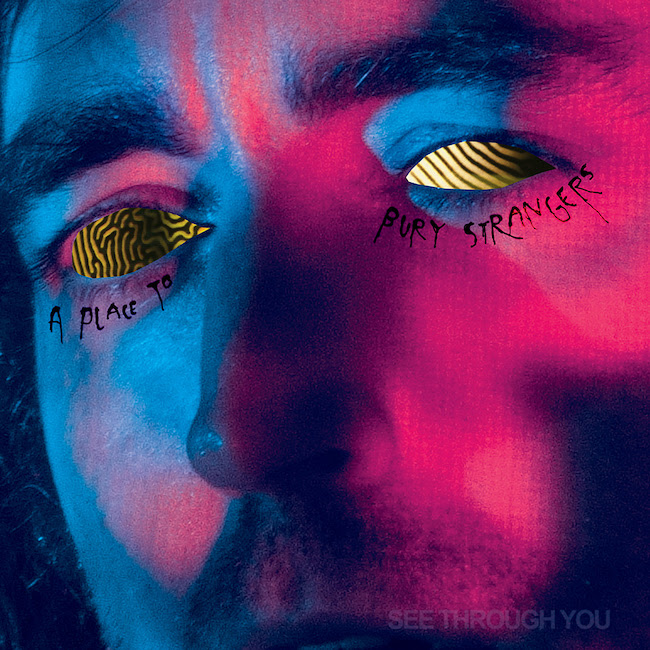 “A wholly unsanitised vision, where screeching white noise guitars eclipse thundering beats
in a reverb dungeon far from prissy Health & Safety regulation” Mojo
“Listening to it is a wonderfully disconcerting experience, each track swirling and merging
into new patterns like a murmuration of starlings” Classic Rock
“Crazy-noise-rock” is at its core, but with some interesting curveballs peeking through the onslaught,
perhaps the band are approaching their greatest adventure yet” Music OMH
“See Through You is like an impressionist painting, where you have to stand back to get to the whole picture, to see past
the headbanging and enjoy the melodic songwriting that is at the root of the record” Loud and Quiet
“A Place to Bury Strangers went out of their way to make this record an eclectic and diverse range of sounds within a specific style,
leaving room for innovation and rewarding unpredictability” Flood
“Oliver Ackermann reinvents his noise-psych band as a lean, mean and still strange machine on the band’s excellent sixth album” – Brooklyn Vegan
A Place To Bury Strangers share the video for ‘My Head Is Bleeding‘ from their new album, ‘See Through You‘, out now on vinyl via Dedstrange.
Right away, ‘My Head is Bleeding’ gushes from the speakers with pummeling drums and whirring, anxious electronics–preparing listeners for one deafening blunt-force chorus after another. Wispy synthesizers and lacerating chemical burn guitars engage in a heated call-and-response while Oliver Ackermann extends a desperate plea for sanity to whichever metaphysical entity might be listening. “This song is about internally begging to a God when you might not necessarily believe in one,” says Ackermann. “It’s that moment where there’s just a sliver of hope that anything in your head might connect you with the Universe and actually make a change.”
In the accompanying video from director Travis Stevens (Jakob’s Wife, Girl On The Third Floor), flesh and blood commingle in a pileup of heaving, mysterious biomass as a mechanical womb gives birth to an oily, ectoplasmic form. Says Stevens, “The entire album rips but there’s a plea to transform suffering into joy in this song that I really sparked to. In order to emulate the raw unpredictability of an APTBS performance, I tried to create a similar magical combination of flesh, emotion, intuition and technology.”
WATCH ‘MY HEAD IS BLEEDING’ VIDEO HERE
A Place To Bury Strangers have been delighting and astonishing audiences for close to two decades, combining post-punk, noise-rock, shoegaze, psychedelia, and avant-garde music in startling and unexpected ways. ‘See Through You’ is an explosive journey which explores the listener’s limits of mind-bending madness while simultaneously offering the catchiest batch of songs in the band’s discography. Outpacing even their own firmly blazed path of audio annihilation, See Through You repeatedly delivers the massive walls of chaos and noise that every A Place To Bury Strangers fan craves in spades. It’s a nod of the cap to the art school ethos of the band’s origins, while forging a new and clear direction forward.
And just as many of his peers in the New York City underground seem to be slowing down, Ackermann’s creativity is accelerating. He’s launched his own label – Dedstrange – dedicated to advancing the work of sonic renegades worldwide. He’s also refreshed the group’s line-up, adding Ceremony East Coast’s John Fedowitz on bass and Sandra Fedowitz on drums. Ackermann and John Fedowitz are childhood friends who played together in the legendary Skywave, and the band has never sounded more current, more courageous, or more accessible. 2021’s Hologram EP was the first release from the new line-up – and the first on Dedstrange – and the reaction was ecstatic, with Pitchfork saying that Ackermann had “transcended his gearhead tendencies, gracefully navigating fuzz and feedback loops as well as melodies and hooks”. ‘See-Through You’ pushes things even further. Simply put, it’s an epic, instant classic.
WATCH ‘LET’S SEE EACH OTHER’ VIDEO HERE
WATCH ‘HOLD ON TIGHT’ VIDEO HERE
WATCH ‘I’M HURT’ VIDEO HERE
WATCH ‘I DISAPPEAR (WHEN YOU’RE NEAR)’ VIDEO HERE
WATCH ‘LOVE REACHES OUT’ VIDEO HERE
STREAM ‘SEE THROUGH YOU’ HERE
BUY ‘SEE THROUGH YOU’ HERE
‘SEE THROUGH YOU’ TRACKLISTING
1. Nice Of You To Be There For Me
2. I’m Hurt
3. Let’s See Each Other
4. So Low
5. Dragged In A Hole
6. Ringing Bells
7. I Disappear (When You’re Near)
8. Anyone But You
9. My Head Is Bleeding
10. Broken
11. Hold On Tight
12. I Don’t Know How You Do It
13. Love Reaches Out
A PLACE TO BURY STRANGERS 2022 UK/EUROPEAN TOUR DATES – TICKETS ON SALE HERE
Mon 14 March – Durer Kert – Budapest, Hungary
Wed 16 March – Control Club – Bucharest, Romania
Thu 17 March – Mixtape5 – Sofia, Bulgaria
Fri 18 March – Eightball – Thessaloniki, Greece
Sat 19 March – Temple – Athens, Greece
Mon 21 March – 25th of May Hall – Skopje, Macedonia
Tue 22 March – Club Drugstore – Belgrade, Serbia
Thu 24 March – Mochvara – Zagreb, Croatia
Fri 25 March – Cinema Perla – Bologna, Italy
Sat 26 March – Largo – Rome, Italy
Sun 27 March – Legend Club – Milan, Italy
Tue 29 March – Bogen F – Zurich, Switzeralnd
Wed 30 March – Backstage – Munich, Germany
Thu 31 March – Caves Du Memoir – Martigny, Switzeralnd
Fri 01 April – La Trabendo – Paris, France
Sat 02 April – Lafayette – London, UK
Mon 04 April – Kayka – Antwerp, Belgium
Tue 05 April – Gleis 22 – Munster, Germany
Wed 06 April – Melkweg – Amsterdam, Netherlands
Thu 07 April – Vera- Groningen, Netherlands
Sat 09 April – Hus 7 – Stockholm, Sweden
Sun 10 April – John Dee – Oslo, Norway
Mon 11 April – Pumpehuset – Copenhagen, Denmark
Tue 12 April Hole 44 – Berlin, Germany
Wed 13 April – MTC – Cologne, Germany
www.instagram.com/aptbs
www.facebook.com/aplacetoburystrangers
www.twitter.com/aptbs
www.aplacetoburystrangers.bandcamp.com