A.D. 2020 released their new single “Ricochet” to all major platforms today. “Ricochet”, written by Mark McNelley, Dan Reed and Todd Thanhauser, is the first single from the band’s forthcoming album Lockdown Diaries due out independently on August 10, 2021.

“Ricochet” is available to stream and download on Itunes, Amazon, Spotify and all major digital platforms and is also available for purchase at www.ad2020music.com

“Mark McNelley and I had discussed the album the album that would become Lockdown Diaries a year earlier when were at Red Rocks in Colorado. If you can’t be inspired at Red Rocks, I give up. We began collaboration on the songs that would eventually make up the album in June of 2020 at the height of the pandemic. We wanted to create songs with a positive message and work with friends who we felt would bring positive energy to the project. I had known Dan Reed and Melvin Brannon from Dan Reed Network for a very long time and was a fan of their music and each of them personally. In May of 2020 I told Dan Reed of the idea to do an album with musicians who were home from touring and he asked me who I was going to get to play guitar and bass and I mentioned Greg Smith and Ron “Bumblefoot” Thal as possibilities. I had met Greg Smith from Ted Nugent’s band the year before and had called him to tell him of the idea and he thought it was something he was interested in so we stayed in touch as I assembled the rest of the musicians. I had been listening to Ron “Bumblefoot” Thal’s latest acoustic album Barefoot 3 and was blown away by his arrangements. I had met Ron also the year before and knew he was an amazing guitar player and also a nice guy so I really wanted him involved if there was a way” says Todd Thanhauser, the band’s drummer.

He adds, “Ricochet” was the first song we wrote together in June of 2020 and the first time I heard the demo that Dan Reed had sent to us I knew the song was going to be something special.” 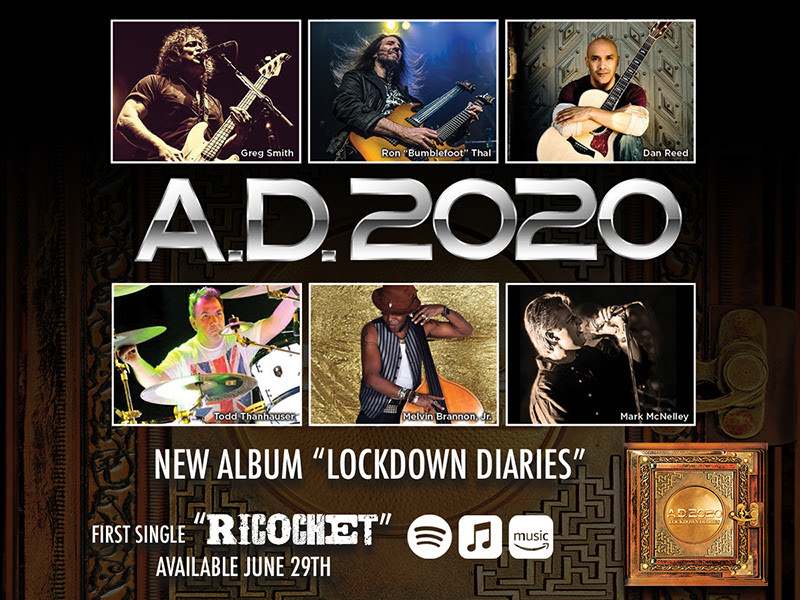