THE EPIC WORKS
1991-2015
BOX SET
OUT 12.07.19
(Frontiers)
pre-order link
http://radi.al/VandenPlasTheEpicWorks
promo trailer
youtu.be/eFyxLlKQ5pM
Frontiers Music Srl is excited to announce the release of ‘The Epic Works 1991-2015’, a stunning box
set collection from Vanden Plas, the German masters of progressive metal. It contains eight studio
albums, an EP, a live recording and a bonus disc entitled ‘Bonus Treasures’ that consists of unreleased,
bonus, rare and demo tracks. The full list of titles included is:
1 Colour Temple
2 AcCult
3 The God Thing
4 Far Off Grace
5 Spirit of Live
6 Beyond Daylight
7 Christ 0
8 The Seraphic Clockwork
9 Chronicles Of The Immortals: Netherworld [Path One]
10 Chronicles Of The Immortals (Netherworld II)
11  Bonus Treasures (Physical Edition Only) : see tracklisting below 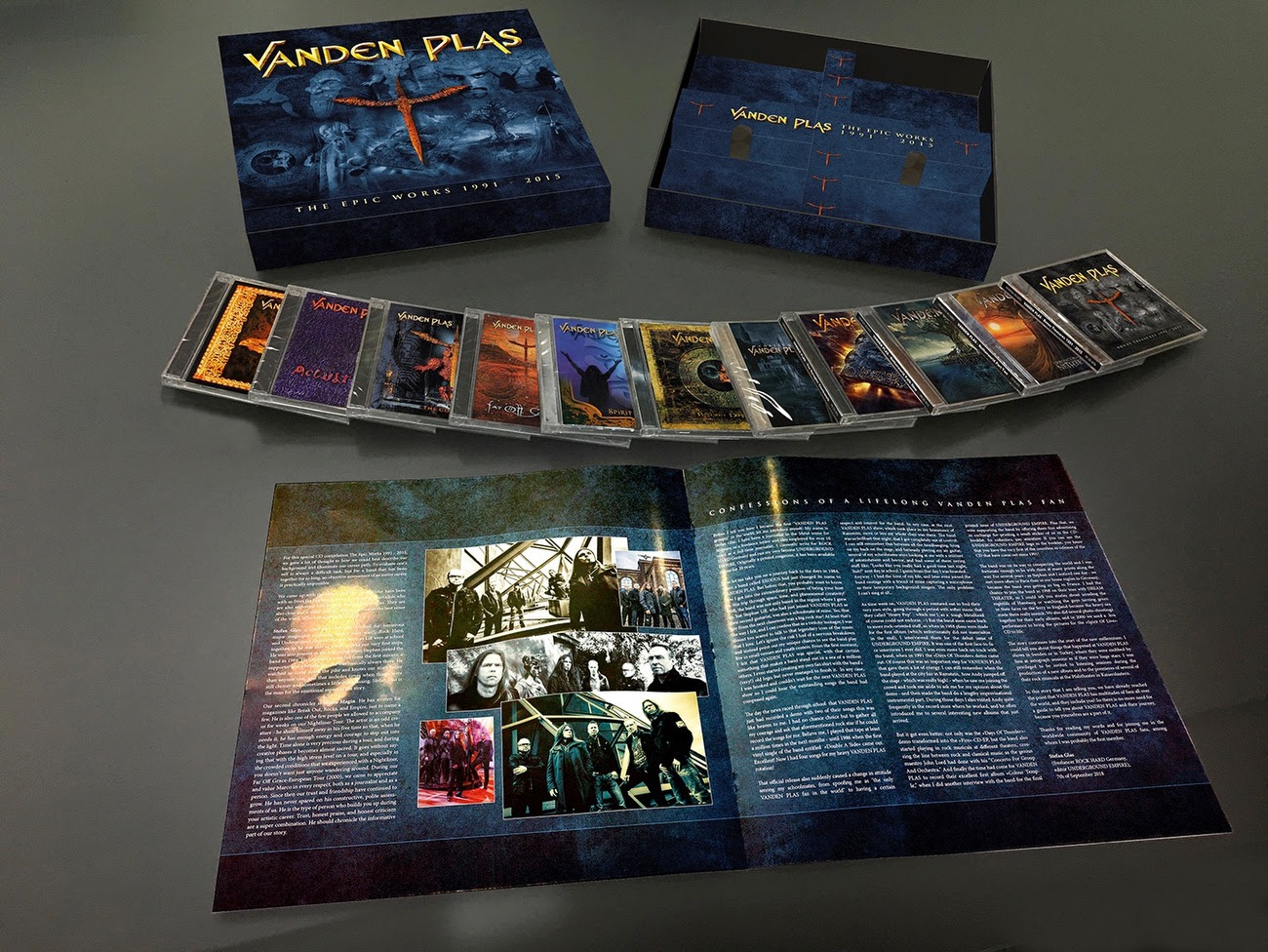 A strictly limited edition of 1500 copies worldwide, this box set also includes a booklet with notes written
by Stefan Glas (Rock Hard, Underground Empire magazines) and Marco Magin (Breakout magazine),
plus never-before-seen pictures and band notes for each album.
Frontiers will also make a selection of releases available on vinyl for the first time on 2xLP gatefold
180g coloured vinyl, including ‘Colour Temple’, ‘The God Thing’, ‘Far Off Grace’, ‘Beyond Daylight’ and
‘Christ 0’. Collectors beware – these will be manufactured in very short runs and then discontinued.
“We are very proud of this box set, which contains the demos, singles and studio albums we released
during this period,” says guitarist Stephan Lill. “Lots of time was spent gathering these releases,
covering almost 25 years, into a very nice package with a detailed band history, lots of pictures with our
fans and us together, and much more. For us, and I think for our fans too, it is very exciting to follow our
musical development from the melodic power rock style we played at the beginning of our career to the
progressive metal we are known for today. Eight studio albums, a live release, an acoustic release, plus
a collection of all the bonus tracks we did during this period are on display here. The bonus track
collection showcases the other side of Vanden Plas: acoustic versions of songs of our own, covers of
influences like Dokken or Kansas and special treats like a cut from our rock opera ‘Ludus Danielis’ or
the song we wrote for our favourite soccer club 1. FC Kaiserslautern. It almost seems a bit unreal when
you see all these releases together, considering the fact that at the same time all the band members
were engaged in theatre productions such as ‘The Rocky Horror Show’ or ‘Jesus Christ Superstar’, and
that we also wrote five rock operas which were performed in several German theatres. I hope our fans
will enjoy this musical journey as much as we did and still do.”
For over two decades, Vanden Plas have been flag bearers for intelligent, intense, progressive metal.
From their debut album, ‘Colour Temple’, right up to the recent saga, ‘Chronicles Of The Immortals’,
(which saw them collaborate with bestselling author Wolfgang Hohlbein), the band have consistently
wowed the progressive metal world with their amazing music.
This set is an unmissable occasion to get to know in-depth the abilities and art of one of progressive
metal’s greatest bands.
‘BONUS TREASURES’
Tracklisting
1 Kiss Of Death
2 Point Of Know Return
3 Gethsemane
4 Shape Of My Heart
5 Combien De Larmes (How Many Tears – French Version)
6 Raining In My Heart
7 Godmaker (Acoustic Radio Version)
8 Days Of Thunder
9 Fire
10 Ridin’ The Wind
11 Eleyson
12 Das Ist Für Euch

VANDEN PLAS : 2015 promo photo
VANDEN PLAS
Andy Kuntz – vocals
Stephan Lill – guitar
Andreas Lill – drums
Günter Werno – keyboards
Torsten Reichert – bass
vandenplas.de
facebook.com/vandenplasofficial
ABOUT FRONTIERS MUSIC SRL
Originally founded in Naples, Italy in 1996 by Serafino Perugino and his father Fernando as a
distribution company, Frontiers has developed into one of the premiere independent rock labels in the
world. Synonymous with quality music from across a broad spectrum of rock genres, the company has
worked with multiple genre heavyweights and fan favourites. Aside from providing a home for classic
artists from the 1970s and 80’s, it also boasts a wealth of young, up and coming talent that, with a savvy
and forward thinking A&R and marketing approach, will be developed into the future of rock and metal.
With a deep commitment to and passion for THE MUSIC and the artists who create it, plus massive
global distribution, sales, marketing and publicity channels, Frontiers is the premiere home for both
established and emerging rock artists.
Head Office: Naples, IT | U.S. Office: Nashville, TN
Subscribe to be alerted when new videos are added:
radi.al/SubscribeFrontiers
Follow the ‘Newest From Frontiers’ playlist on Spotify:
spoti.fi/1rQz5Zm