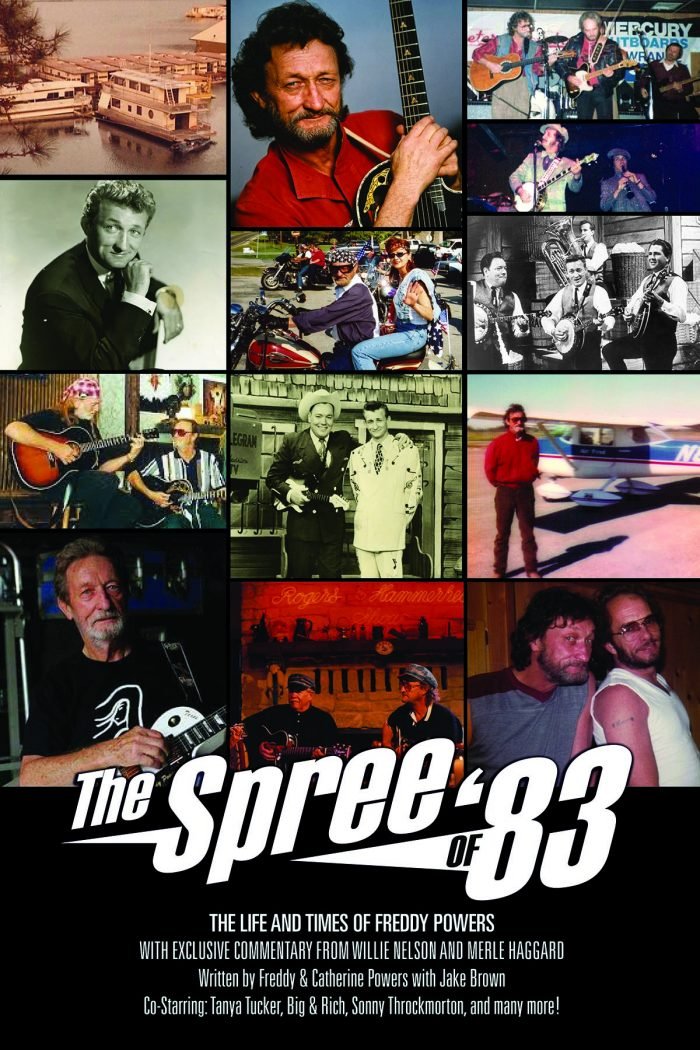 NASHVILLE, TN – (April 20, 2021) — Starting May 15, 2021, the late Country Music Legendary Singer-Songwriter Freddy Powers, widely credited for bringing Dixieland Jazz into the Nashville mainstream, will return to stores with a new memoir, THE SPREE OF 83: THE LIFE AND TIMES OF FREDDY POWERS (Natural High Books/Baker & Taylor) alongside an accompanying digital soundtrack and 2 new live albums, available April 23. Co-written with his wife Catherine Powers and award-winning music biographer Jake Brown, Freddy recounts first-hand the highly-entertaining and emotionally-touching story behind his decades-long roller-coaster ride through the music business.  Featuring multiple trips to the top of the charts from headlining casinos in the 60s and 70s, writing hits in the 80s, and living on Willie Nelson’s golf course through the 90s, Powers is equally open about his inspiring struggle battling Parkinson’s disease in the years before his death in 2016.
The Texas Country Music Hall of Fame inductee has been to the top of the charts as both a producer (Willie Nelson’s Grammy-winning Over the Rainbow LP) and songwriter, penning many # 1 hits with sidekick and fellow legend Merle Haggard, who in the book declares “Freddy Powers is one of my favorite people in the world,” while Willie Nelson adds personally that “Freddy’s strongest suit, I always thought, was his rhythm guitar playing. He was a great rhythm guitar player, and he wrote some great songs with and for Merle.”
Joining Nelson and Haggard, who both contribute extensive exclusive commentary, are players and peers from all six decades of Powers’ star-studded career, including songwriters/stars including Sonny Throckmorton, Paul Buskirk, Floyd Tillman, Tanya Tucker, Big & Rich, Larry Gatlin, producer Frank Liddell, Mary Sarah, and many more.
In addition to the book, fans can stream a dynamic collection of new music, available on all digital platforms, including a 60-Song, 2-disc studio/live collection of Freddy Powers’ best-known hits, featuring musical duets and collaborations with many of the aforementioned music stars.  Along with the Official Book Soundtrack, fans of Freddy’s Dixieland Jazz and legendary Comedy routines are given a front-row seat with Freddy Powers & The Powerhouse IV: LIVE IN  VEGAS – ‘75! and Freddy Powers & The Powerhouse IV: LIVE IN RENO!
With a film of his life story deep in development, Freddy Powers’ is among the most exciting new books or albums hitting stores this summer! Please visit www.TheSpreeof83Book.com for upcoming special announcements on free bonus content including never-before-seen music,  live performances, and fan giveaways.