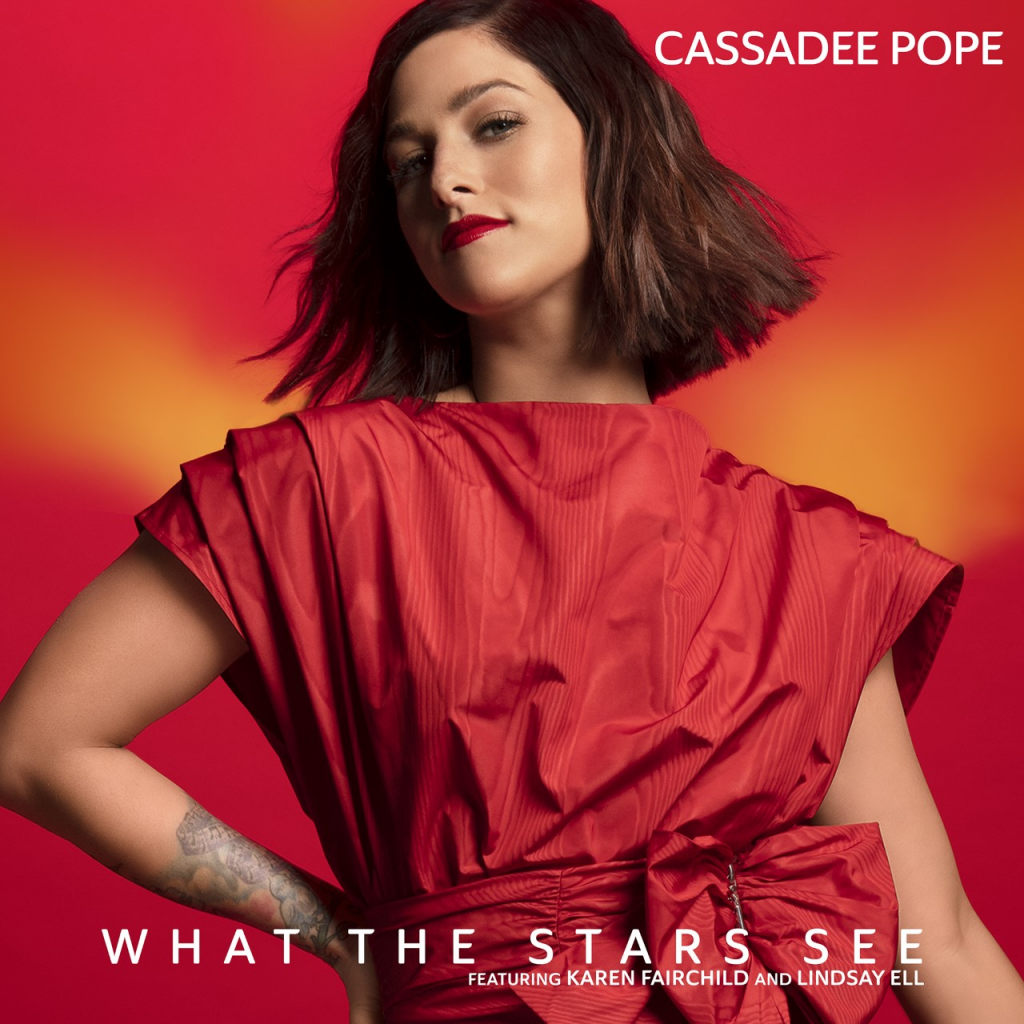 NASHVILLE, TN. – (April 30th, 2021) – GRAMMY-nominated and Platinum-certified singer-songwriter, Cassadee Pope, is set to release her latest single “What The Stars See” featuring Karen Fairchild (Little Big Town) and Lindsay Ell, available everywhere on May 7th 2021. The explosive track, written by Pope, Jake Rose and Lindsey Rimes, beautifully expresses the desire to peek into someone’s life who is no longer part of your own.
Today, Cassadee took to social media to share the exciting news that both Lindsay Ell and Karen Fairchild would be joining her on the track: Instagram / Twitter / Facebook. Fans who pre-save “What The Stars See” will automatically be entered to win their very own star named after them. The winner will be announced the same day as the track’s release (May 7th.)
​Pre-Save “What The Stars See”
“I was inspired to write ‘What The Stars See’ after sitting outside one night looking up at the stars, curious what their perspective might be looking down on us,” said Pope. “It made me think back to times in my life when I had just come out of a relationship but still felt so connected to the other person. I imagined having the superpower to be among the stars and observe, from their perspective, an ex moving on with their life (or not).”
Cassadee will be releasing the music video for “What The Stars See” exclusively with PEOPLE.com on May 14th. The video, directed by Ed Pryor, is a colourful take on the voyeuristic sensibilities of famed sci-fi action film, Blade Runner, and includes special appearances by both Karen Fairchild and Lindsay Ell.
“What The Stars See” Music Video Sneak Peek (BTS Footage Courtesy of Eric Savage)
Cassadee’s powerhouse vocals come alive stronger than ever under the masterful direction from the track’s producers Nick Wheeler (All-American Rejects) and Karen Fairchild (Little Big Town) – role models who represent the best from the eras of Cassadee’s own musical journey. Working with these two accomplished artists from different musical backgrounds created a genre-blending synergy that fully encapsulates Cassadee’s sound.
Stayed tuned for even more new music from Cassadee this year!
For additional information on Cassadee Pope, please visit: Instagram | YouTube | Twitter | Tik Tok | Facebook | Website

ABOUT CASSADEE POPE:
Cassadee Pope is a GRAMMY-nominated, Platinum-certified singer-songwriter who is gearing up to release all-new music in 2021. Last year, Cassadee released her first acoustic solo album co-produced by Pope alongside Todd Lombardo, the project followed her album, STAGES, featuring hit singles “Take You Home,” “One More Red Light,” and “If My Heart Had a Heart.”

From fronting rock band, Hey Monday, to winning Season 3 of “The Voice” and releasing her #1 debut album Frame by Frame, Cassadee has effortlessly re-arranged the lines of Country and Pop. She has experienced tremendous success throughout her career, with Platinum-selling single, “Wasting All These Tears,” being awarded with “Breakthrough Video of the Year” at the 2014 CMT Music Awards and her #1 hit “Think of You” with Chris Young receiving a 2017 Grammy nomination for “Best Country Duo/Group.”

Cassadee has toured extensively, joining legendary artists Tim McGraw and Dierks Bentley, playing London’s iconic O2 Arena during C2C: Country to Country Festival, and earning the distinction of the only Country artist to perform at 2018’s Warped Tour. Cassadee performed “If My Heart Had a Heart” on the TODAY show and toured with Maren Morris on her GIRL: THE WORLD TOUR. Cassadee continued to tour throughout the spring of 2019 as the headliner of the “2019 CMT Next Women of Country Tour,” which brought the franchise to the UK, and outside of the U.S. for the first time ever.