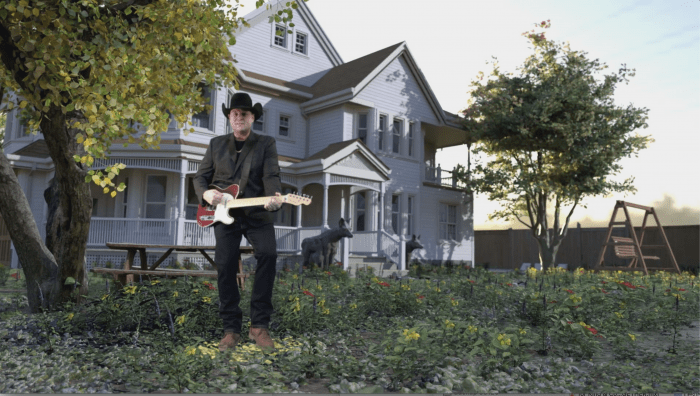 The release is off of his latest album, Diamonds in a Whiskey Glass

7/12/21 – Gord Bamford released his latest video, “Heaven On Dirt” on Youtube today.  The track is off of his, 2021 album, Diamonds In A Whiskey Glass, which was produced by Bamford and noted songwriter/producer, Phil O’Donnell.

The video which premiered on CMT.com last week finds Gord and others living in their, “Heaven on Dirt” in the midst of busy city-scapes.  The video directed by, Kash Tahen leaned heavily on green screen, animation, and live-action footage to bring the song to life.  Bamford commented, that “it was a challenge shooting over the last year and we took a risk by doing something completely different in order to still create something visual for ’Heaven On Dirt’,” I filmed myself in front of a green screen in order to have live-action footage included in the video. Our director then placed it into the rest of the video that also included the animation and live-action footage.”

When commenting on the song, Bamford said, “I feel the messaging of this song is very powerful, especially given the times we all have been living in. It’s about finding your own heaven on dirt, that authentic place that brings you happiness. We all live very busy lives and one of the positives of this busy year was that we could slow down and appreciate what is important to us.“

Australian-born and Alberta-raised, Gord Bamford stands as one of the most decorated artists in Canadian country music with an impressive 26 Canadian Country Music Association (CCMA) awards, multiple JUNO nominations and is the only two-time winner of Nashville’s Country Music Association (CMA) Global Country Artist (2013 & 2015). But it is his distinctive sound, and songwriting ability that defines Gord Bamford as one of country music’s best neo-traditional artists.

This 3-time CCMA ‘Male Artist of the Year’ releases his 10th studio album titled “Diamonds in a Whiskey Glass”, in June of 2021. The second single, “Heaven on Dirt” is already quickly climbing the charts. Previous accolades include the recognition he received for his eighth studio album Neon Smoke (2018) which produced the smash #1 chart-topper “Dive Bar”. In 2016, “Tin Roof” received the honor of CCMA’ Album of The Year’. Gord celebrated his first #1 hit song, ‘When Your Lips Are So Close’ in 2013.

Gord’s self-named charity The Gord Bamford Charitable Foundation was established 14 years ago, in 2008. Gord wanted to use the recognition he had generated to give back and use his influence he has. The charity has generated over $4.2 million focusing on primarily children’s charities such as the Make-A-Wish Foundation, Ronald McDonald House, Big Brothers & Big Sisters, numerous children’s hospitals across Canada and MusiCounts.

“Those organizations have had an impact on my life and that’s why we do what we do. It’s always great to get out, play music, be on stage and wake up every morning loving what I do. But probably the greatest thing I get to do is interact with a lot of these children and try to make a difference in their lives. It’s hard to comprehend but it’s an awesome thing to see a kid’s face light up who is really sick and all he wants to do is go to Disneyland. It puts it all into perspective as to why I think God put me on earth to do what I do because it’s helping other people.”

These organizations have appreciated the hard work Gord has done to raise funds to support their missions by honoring him in their own ways.  Big Brothers Big Sisters recognized Gord with their Distinguished Alumni award in 2015. Not only for helping to save the Lacombe chapter but for his work he does to support national initiatives like ‘mentoring matters.’ MusiCounts has recognized Gord for his ongoing commitment to ensure that everyone has access to music through the Band-Aid program. In 2019, they gave him the MusiCounts Inspired Minds Ambassador Award. Growing up in Alberta and part of the local 4-H Club, Gord embraced their motto learn by doing. In 2020, 4-H Club recognized not only his embracing of their motto but his support in the years that have followed by acknowledging him with 4-H Canada’s Distinguished Alumni Award at the annual 4-H Canada Leadership Awards.