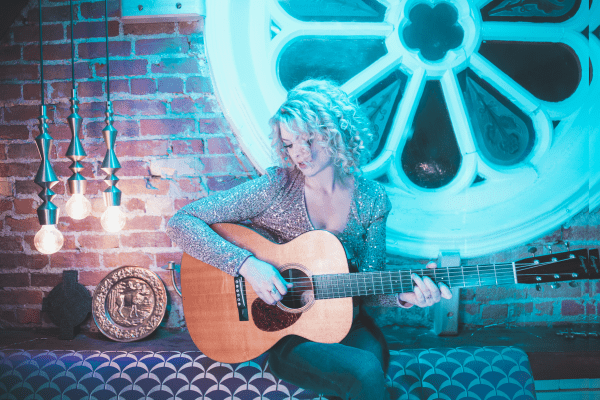 Above: Callie McCullough; credit: Kris Von Kleist
NASHVILLE, TN (March 29, 2021) – Nashville’s Callie McCullough, a modern singer-songwriter inspired by timeless bluegrass and old-school country music, celebrates the one-year anniversary of her After Midnight EP with the release of  the music video for “No Good Way.”
Click here to watch the performance video which was filmed at Revival House, an old Canadian church converted into a live music venue.
“I spent this winter back home in Canada for the first time in years and it was filled with many beautiful though cold and snowy days,” says McCullough. “As our lockdown lifted, I felt inspired and had the desire to create. We had the chance to sneak into this absolutely incredible old church turned live music venue called Revival House in my hometown of Stratford Ontario Canada for the day and it was magical! From pulling together an all hometown video crew the week of and many conversations with the album’s producer, Dustin Olyan, who shot all the instrumentation that he played on the record at his home studio, we brought to life this special performance video of one of my favourite tracks on the record, ‘No Good Way.’”
The song, penned by McCullough and Scotty Kipfer and produced by Dustin Olyan, was released on McCullough’s After Midnight EP (March 27, 2020) which received high praise. Billboard noted After Midnight, “…highlights the Canadian singer-songwriter’s whispered vocals alongside descriptive songwriting and ace musicianship provided by members of Union Station and the Time Jumpers.” Kira Grunenberg of American Songwriter offered that McCullough is “…an artist who chooses not to rest her creative laurels on the singularity of one approach to the traditional roots sub-genre…McCullough adds another stripe of sonic worldliness to her increasingly beloved repertoire…McCullough’s own vocal lilt, which sounds at once delicately modern and warmly classic in its character.”
Callie McCullough has chased her unique muse for years, making contemporary roots music that nods to the legends who came before her. It’s a sound anchored by intimate ballads and McCullough’s gorgeous voice, whose Alison Krauss-worthy tone and Dolly Parton-sized beauty stand in contrast to her dry humor and larger-than-life personality.
Emotional and eclectic, After Midnight—tracked in her adopted hometown of Nashville—also features first-class picking from members of the Grammy-winning bluegrass band Union Station and western-swing super-group the Time Jumpers. The result is a collaborative and intimate EP that laces McCullough’s voice with touches of dobro, fiddle, mandolin, banjo, and acoustic guitar, mixing the fresh energy of a rising star with the finesse of a hotshot backing band.
To bring those songs to life, McCullough turned to Nashville-based producer and multi-instrumentalist Dustin Olyan who helped assemble a top-tier studio band whose members included Grammy-winning banjo/guitar player Ron Block, upright bassist Barry Bales, dobro player Brent Burke, drummer Billy Thomas, accordion and piano player Jeff Taylor, and celebrated fiddler Stuart Duncan. Recorded in iconic Nashville-area studios like the Tracking Room and the Sound Emporium (as well as Olyan’s home studio, the Tone Distillery), After Midnight blends hushed, nocturnal soundscapes with traditional influences, contemporary twists, sharp songwriting, and the expressive singing of a front-woman who’s truly found her own voice.
Track listing for After Midnight:
“After Midnight”
“Feathers”
“Five Dollar Pearls”
“Missing You”
“No Good Way”
“Three Quarter Time”