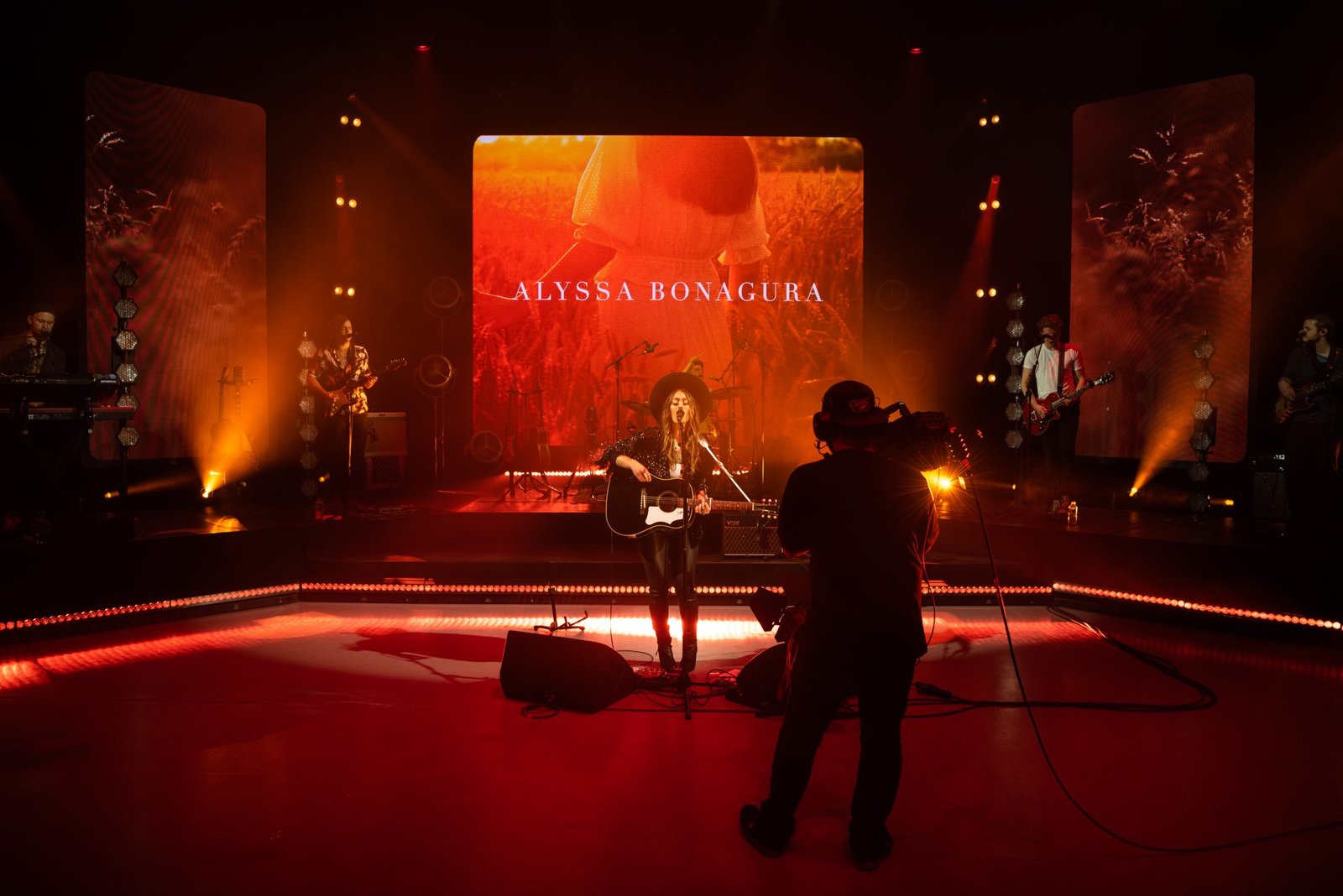 LONDON, UK. – (4th Aug, 2021) – Alyssa Bonagura has shared a full-band performance of her new single ‘New Wings’, the latest in a series of videos filmed last summer in Liverpool, when the Nashville singer-songwriter visited the UK during the easing of travel restrictions – watch here.

As she told music site Holler, who premiered the video yesterday (3/8), “We all got to come together for the love of music and play after months of no work and I think the love of it really shines through these videos. [Adlib] helped me create an arena stage show with personal visuals that brought the show of my dreams to life.”

Having studied music at the Liverpool Institute of Performing Arts (LIPA), Alyssa returned to the city last summer as travel restrictions began to lift, to reconnect with a group of musicians and bring them together to film a twelve-song live set. Filmed and produced by leading event company Adlib, who built a full-scale live production in their Liverpool studio, the shoot was the closest that everyone involved could come to getting back out on the road. This week’s release coincides with her return to live music in the UK, having performed at Manchester’s Buckle & Boots festival over the weekend alongside The Shires, Tebey and more. Upcoming UK live dates:

Aug 5th – JBL Back To Stage at Between The Bridges, South Bank – London

Aug 25th – Nashville Sounds in the Round at Kitchen Garden – Birmingham

‘New Wings’ was given an exclusive first play on BBC Radio 2 by Bob Harris last month, who described Bonagura as “an outstanding artist,” before the single went on to be featured as one of Baylen Leonard’s spotlight tracks on Absolute Radio Country and included on New Music Friday (Spotify), and The Independent’s weekly Now Hear This playlist.

ABOUT ALYSSA BONAGURA:
A celebrated songwriter, producer, and multi-instrumentalist, Alyssa Bonagura has spent the past decade fine-tuning a sound that reaches far beyond her Nashville roots. It’s a sound that blurs the boundaries between genres, mixing the southern storytelling of country music, the free-thinking spirit of rock & roll, and the cinematic sweep of Brit-pop into its own hybrid. For Alyssa — a lifelong road warrior who spent her infancy aboard a tour bus, recorded a duet with Kenny Rogers at 10 years old, received her college diploma from Sir Paul McCartney, performed stadium shows as a member of the major-label duo The Sisterhood Band, and currently balances her critically-acclaimed solo career with an ongoing gig writing songs for Jessie James Decker, Aerosmith frontman Steven Tyler, and others — it’s also a sound that’s every bit as diverse as her own story.

Nowhere is that clearer than on 2021’s “New Wings.” Recorded during the pandemic, it’s a song about struggle, survival, and the soaring feeling of flight, delivered by a multidimensional musician who’s never shied away from unexplored territory.